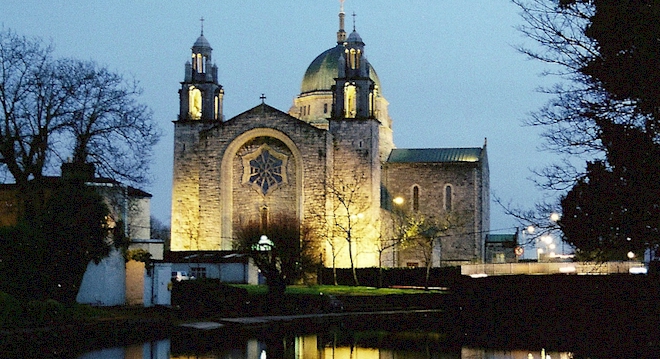 Galway Cathedral is one of the city’s largest buildings and its huge octagonal dome is visible for miles around.

Cathedral at Dusk by MonroeStahr

It is relatively new, completed in 1965, and unusually for a church of that period was built not of concrete but of stone (Galway limestone), a major project with took almost 8 years to complete. It mixes several architectural styles, and while the Renaissance influence is to the fore, there is a Gothic style to the arches in the nave, a Spanish feel about the side aisles and a Romaneque tower to add to the panoply of styles.

This somewhat odd mix fulfilled the vision of Bishop Micheal Browne, who was responsible for its construction. It was designed by J.J. Robinson, but the Bishop’s input at every stage was extensive. That it all somehow comes together and works beautifully is nothing short of a triumph of eclecticism. 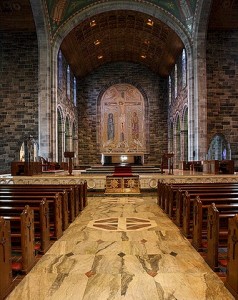 Inside Galway Cathedral by Samuca

There is some very interesting art in the Cathedral, in fact it is something of a repository for ecclesiastical art over the last 40-50 years in Ireland.

In particular look out for the statue of the Virgin, the work of artist Imogen Stuart who is also responsible for the intriguing bronze panels and handles on the west door and Gabriel Hayes’ stations of the cross.

The huge crucifiction mosaic behind the altar, by Patrick Pollen, is created from impossibly tiny coloured tiles – it’s hard to even contemplate the complexity of creating such a thing – and has a wonderfully luminous quality about it.

There is an equally lovely mosaic by the same artist of St Joseph the Worker.

The Cathedral floor is made from locally quarried Connemara Marble, more often seen in small decorative items – I don’t believe there is an area as large as this created from this marble anywhere. It is spectacular. 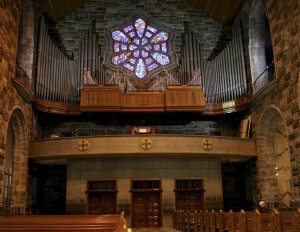 The pipe organ is one of the finest in the country and was built for the Cathedral by  Liverpool firm of Rushworthe & Dreaper.

It has three manuals and 59 speaking stops, and is used regularly during services as well as in the annual series of summer concerts.

The beautiful and colourful Rose Window above the organ is by George Campbell. It is just one of many stained glass window by a number of different artists, all very different but somehow combining to make a unified whole.

The light flowing though these windows gives a warm feeling to the Cathedral interior which belies its vastness and its quite stark structure.

The Cathedral is located in a part of Galway City known as Nun’s Island, so named because it was given by Galway Corporation to the Poor Clares, an order of nuns, in 1649.

Although the gift was described as a “free grant for ever”, the nuns do not nowadays own the entire area, but they do still have a convent on Nun’s Island.

The Poor Clare’s are a contemplative order who observe a vow of silence so it is not possible to visit the convent – but surprisingly they do have a website, which gives a fascinating glimpse into their lives.