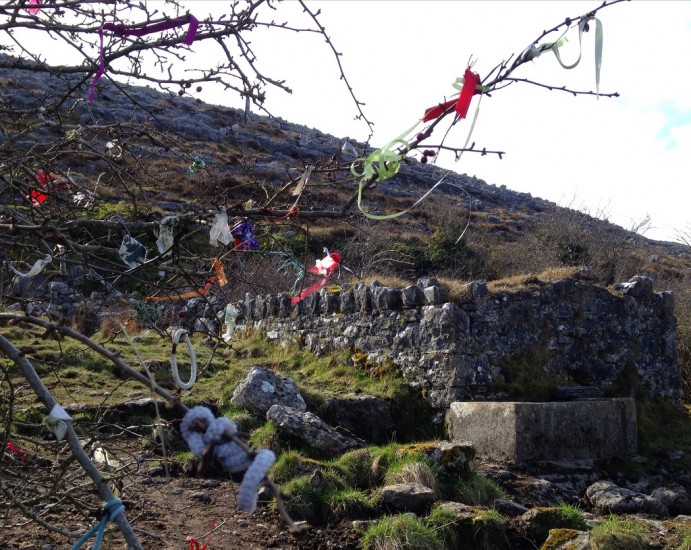 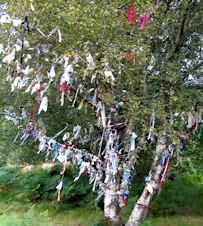 As you travel about Ireland you will from time to time come across a tree or bush by the roadside completely covered in rags or scraps of clothing.

You have found a ‘ragtree’ or a ‘raggedy bush’.

Usually, though not always, the trees are close to Holy Wells, and they are almost invariably Hawthorn trees.

The custom of hanging rags on trees is particularly strong among Ireland’s Traveller community, an indigenous minority of nomadic people whose culture is very old and who still maintain many ancient customs which have largely died out among the rest of the population.

Travellers also have a very strong attachment to Holy Wells, often visiting a series of them annually.

Why do people hang rags on trees? 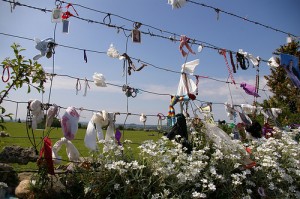 Usually the rags are placed there by people who believe that if a piece of clothing from someone who is ill, or has a problem of any kind, is hung from the tree the problem or illness will disappear as the rag rots away.

Sometimes the rag represents a wish or aspiration which will come to pass as the rag rots.

Sometimes the trees are so loaded with rags that the leaves are pretty much invisible and the odd tree has even been killed by a particularly  heavy load.  Even in the absence of the tree people continue to hang rags, now from a fence or wall where the tree used to stand.

Where to find Rag Trees

There are rag trees in many counties of Ireland, you will almost certainly pass at least one as you travel about. Ones we are aware of include:

On the laneway leading to Dungiven Priory, on the A5 going east, just outside the town of Dungiven

In Tully, close to the entrance to the National Stud, the tree is beside St Brigid’s Well near the ruins of an old church. It is well signposted.

As you travel from Kilkenny to Kells on the R694 there is a rag tree on the right about 4 miles from Kilkenny. It’s near a very dangerous bend on a narrow road, so be careful if you are trying to take photos.

Near the Well of St. Lasair, which is to the east of Ballyfarnon village on the Keadue Road, in a lovely location on the banks of Lough Meelagh. The ruins of the church of Kilronan and a graveyard a few yards away are worth a short stop.

Near the Holy Well at Tobernalt about three miles south east of Sligo Town. This well has a whole website devoted to it!

Close to the well preserved ruins of Fore Abbey, which is about 4 km east of Caslepollard. The tree is right beside St Feichin’s Well. Fore Abbey is a 13th Century Benedictine Priory and worth a visit.

Also interesting is the Money Tree, a Sycamore tree, at Clonenagh on the Portlaoise to Mountrath Road in Co Laois. There were thousands of coins hammered into the bark of the tree, supposedly in order to bring luck.

Whether this worked or not is unknown, but what is certain is that the money brought no luck at all to the tree  – it was permanently damaged by all the coins and has now been felled. A stump now remains and there is a picnic area beside it.

Trees are part of a lot of old Celtic lore and legend and this page has a collection of intersting facts about tree in Irish myth.

Map of Rag Trees in Ireland