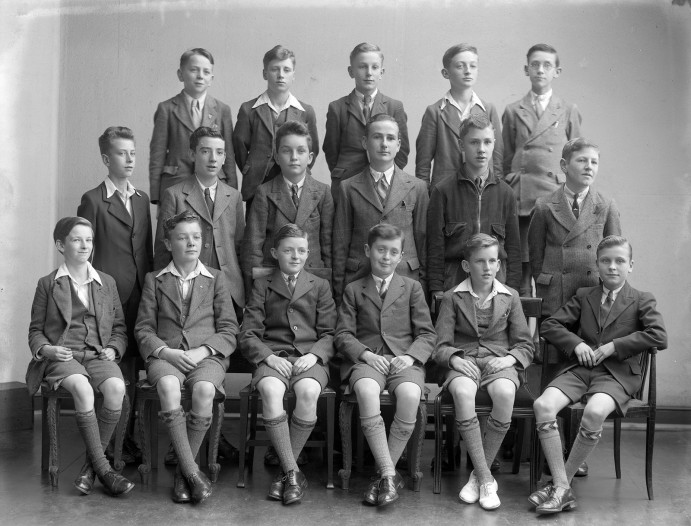 The Story of a Name: Fionn 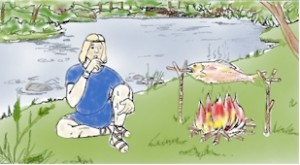 The Salmon of Knowledge

The legend of Fionn McCumhaill, or Finn Mc Cool, is probably the most famous of all Irish Legends. There are many stories told about him, but my favourite is the tale of how he acquired his great knowledge.

As a boy he was sent to study with the druid and poet Finnegas, who for seven years had been obsessed with a quest to catch a salmon.

Not just any salmon, this one had eaten the hazel nuts that fell from nine trees surrounding a well and in so doing become possessed of all the knowledge in the world.

The first person who could eat of this salmon’s flesh would in turn have this knowledge.

Eventually he caught the fish and instructed Fionn to cook it. While doing so the boy burned his thumb and without thinking stuck it into his mouth, in so doing putting a piece of the fish’s skin in his mouth also. And so it was he and not his master who was endowed with the gift of all pervading knowledge.

Say: daw-hee
Means ‘speed’ or ‘agility’. “Dáithí Lacha” was used as the Irish translation for Donald Duck, but it is more often anglicised as David.

Old name of uncertain origin. St Declan is said to have been in Ireland before St Patrick. Many churches and schools bear his name and it is a common name in Ireland.

A very common name in Celtic mythology, it is said to mean ‘friend of all’. Has many anglicised forms including Jerome, Jeremiah and, believe it or not, Kermit! Who knew Kermit was Irish??

Literally means ‘world mighty’, or ‘ruler of the world’.

Means ‘keeper of riches’. Eamon De Valera was Ireland’s first Taoiseach (prime minister) and was later President of Ireland. A variant spelling is Iamonn, which is pronounced Yamon.

In Irish mythology Míl was one of the Spanish antecedents of the Irish Celts. He had two sons, Éibhear Dunn (dark) and Éibhear Finn (fair). The name is mostly found today in the North of Ireland in its anglicised forms.

Not strictly speaking Irish at all, but a name which honours the famous Irish rebel, Robert Emmet. Now quite popular as a first name.

Eo mean Yew, as in the tree but the name is taken to me ‘well born’. Co Tyrone in the north of Ireland is strictly translated as “Land of the Yew”, though it actually got its name from a 17th century warrior Eoin Roe O’Neill (Red Eoin) who led an army to victory over the English at the Battle of Benburb. The name is also one Irish form of John.

Was the name of an early Irish saint. Still in use but uncommon.

Fear Dhia means ‘man of God.’ Ferdia was a warrior of Irish mythology.

Means ‘ravan’. Fiach MacHugh O’Beirne was a considerable thorn in the side of Queen Elizabeth’s army in Ireland in the 16th century and is immortalised in the Irish folk song ‘Follow me up to Carlow‘.

Probably a derivation of Fiach. St Fiachra was an Irish monk who went to France and founded the village of Saint-Fiacre in Seine-et-Marne. He is famous for two things – not permitting women to enter his church and as the patron saint of Paris cab drivers!

Means ‘fair-haired’. St. Finbar is the saint of Cork, and his name a very popular one in the area.

‘Fair son’. It is often anglicised to Florence, and yes, people in Ireland do name boys Florence. Mostly in West Cork, where it is quite a common name, often shortened to Flor.

Means ‘fair’. Finn McCool is probably the best known Irish mythological hero. A member of the Fianna, he is said to have created the Giant’s Causeway in Co Antrim. This is the origin of the surname Flynn.

Fin means ‘white’ and it is possible that ‘tan’ is from a word meaning ‘fire’. So the name can be taken to mean ‘white (fair) haired’ or ‘white fire/heat’. There are several St Fintan’s in Irish history, of whom some of the best known have associations with the midlands, where this name is most commonly found.

Means ‘white’ or ‘fair headed’. Fionn mac Cumhail (Finn McCool) is one of the best known characters of Irish folklore and mythology.

‘Gearr’ means ‘spear’, and the name means ‘spear carrier’, it was a popular name among Norman Irish families. Still common enough, Garret Fitzgerald is a former Taoiseach of Ireland.

A popular name in Galway, especially around Tuam where St. Jarlath founded a monastery in the late 6th century. The letter J does not exist in Irish, so presumably he spelled his name in the Irish form.

Genealogy Software: Do you need it?

You don't absolutely need any special software, but having an easy method of …