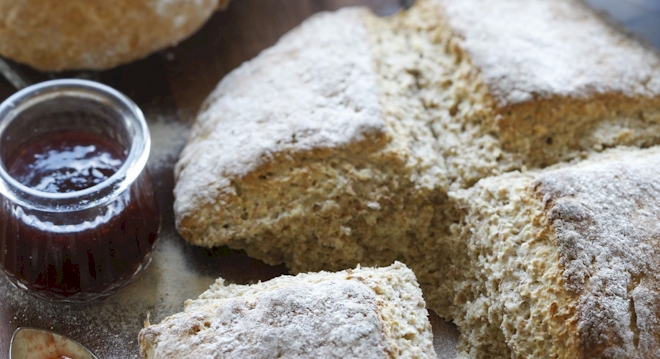 This is variously referred to as Wheaten Bread (mainly in the north), Brown soda bread or just Brown Bread and there are probably as many different recipes as there are cooks.

At its basic level it is much the same as white soda bread except with whole grain flour.

There are two recipes here, the first for Brown Soda Bread at its most simple, the second for a slightly more complex whole wheat bread, though it’s also an easy recipe.

If not made with a light touch this can be heavy and doughy, so handle with care. The most common mistake people make when first making soda bread is to think that the ingredients look too simple and so adding or altering ingredients.

This is a very simple recipe, but it works, so just stick to it!

As I write there is a loaf of this very bread baking in my oven, smelling delicious, which I am making to photograph for this article. We will eat it too of course!

IMPORTANT: All the notes on ingredients for white soda bread also apply here, so if you have not read them, do so before you start.

The recipe I use most often has twice as much wholemeal as white flour, but you can also use half and half, which makes a lighter bread. There is a second recipe below for a more substantial brown bread, which is excellent thinly sliced and served with smoked salmon.

Put the wholemeal flour into a large mixing bowl and add the sieved white flour, salt and bread soda. Mix well. Scoop out a well in the flour and pour in about ¾ of the milk. With your fingers draw the flour into the milk, mixing them with as light a touch as you can. The dough should come together easily into a soft ball, if it is too dry add a little more milk but avoid allowing the dough to become sticky.

Turn the dough onto a floured board and shape it into a flattened oval about 2 inches high. No kneading is required. Cut a large cross into the surface. Place in the oven immediately.

This is a variation of brown soda bread which makes a loaf type bread that is darker and more moist than the one above and has a slightly nutty flavour.

It is heavenly with smoked salmon or with any kind of a cold seafood platter, or just with butter. Which brings me to….

Irish butter has a higher fat content and a lower moisture content than typical American butter, which gives it a much higher smoking point. This means it can tolerate being cooked better, giving a lighter and less watery result. Higher fat also means more flavour, so you need less butter.

This may sound irrelevant, but it explains, at least in part, why recipes that work perfectly in Ireland can taste different, and not always as nice, when they are made somewhere else.

Many specialty food stores in the USA stock European butter and those that do usually have Kerrygold, a well known brand of Irish butter. Which is all very well, except that it is counted as a luxury gourmet item and is about 4-5 times as expensive as it would be here. So using it would make for pretty expensive cooking!

A good alternative in Irish recipes that call for butter is to use half butter half sunflower oil, which about brings the fat content up to the same level, though it will not replicate the flavour. Another good option is to use clarified butter, if you can get it.

Spread the wheat germ on a baking tray and place in the hot oven for 3-5 minutes until it is lightly toasted. In the meantime mix all the dry ingredients together in a large bowl. Whisk together the egg, oil, honey and about ¾ of the milk.

When the wheat germ is done, leave it for about 2-3 minutes to cool a little then mix it in with the dry ingredients. Cut the butter into small pieces and with the tips of your fingers rub it into the flour.

Make a well in the centre of the flour mixture and pour in the milk mix. Quickly and bring the flour in from the edges and mix with the milk, until all the ingredients come together into a soft slightly wet dough. It should not be overly sloppy, you should feel you could pick it up without it running through your fingers, but it should be soft enough that it sinks slowly down and takes on the shape of the bowl. If it is too dry add a little more buttermilk. There is no need to knead this dough.

Put into a 9″ x 5″ loaf tin, the inside of which has been smeared with a little butter or oil. Place in the oven. Bake for 50 minutes. The bread should be nicely browned, have a good crust and sound hollow when you tap it. If it seems a little underdone, put it back in for 10 minutes.

Allow the bread to cool in the loaf tin before turning it out.

This bread keeps for a few days, and is much easier to slice thinly if you wrap it in aluminium foil and keep it until the next day.