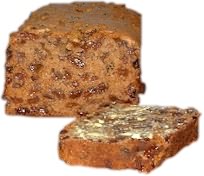 Barm Brack or Tea Brack is a a sort of cross between cake and bread traditionally eaten at Halloween. While bracks bought in stores will use yeast as a rising agent, this version is closer to the original, using bread soda instead.

It is very moist and delicious and although in theory it will stay fresh for several days it never lasts that long!

The word Brack comes from an old Irish word, ‘breac‘, meaning speckled, which refers to the fruit I imagine. Barm (often is pronounced Barn) is thought by some to be from an old English word ‘beorma‘ meaning yeasty. Others say it is a mispronunciation of ‘aran’, which means bread. Aran Breac would have meant Speckled bread, so that version makes sense to me.

Traditionally small items are mixed into the brack before it is baked, each with a message or prediction for the person who gets it in a slice. The items always include a ring, which predicts a wedding within the year, but any or all of the following are sometimes included.

If you are using any of these items, wrap them well in greaseproof or waxed paper before adding them to the mix.

The lemon rind is not added by everyone, but I like the slight tanginess it gives. You will need a 2lb loaf tin or a deep 7″ round tin. I prefer to make it as a loaf, but the round version is probably more traditional.

Put the tea, sugar, lemon rind and dried fruit in a bowl. Stir well, then cover and leave to soak overnight.

The next day, preheat the oven to 350ºF (180ºC/Gas Mark 4) and grease the loaf tin with a little butter. Beat the egg and mix it thoroughly with the fruit. Sieve the flour, spices and bread soda together and stir well into the fruit mixture.

You can mix in any of the charms you are using at this point, or wait until the batter is in the tin and push them in then. The latter method ensures they are ‘fairly’ distributed, especially important if children will be eating the brack!

Turn the batter into the tin, place in the oven and bake for 90 minutes. Allow the brack to cool for about 20 minutes in the tin before turning it out to cool on a wire rack.

Don’t give in to the temptation to eat until completely cool (you will be tempted!).

Food & Recipes from IrelandHalloweenIreland & the Irish