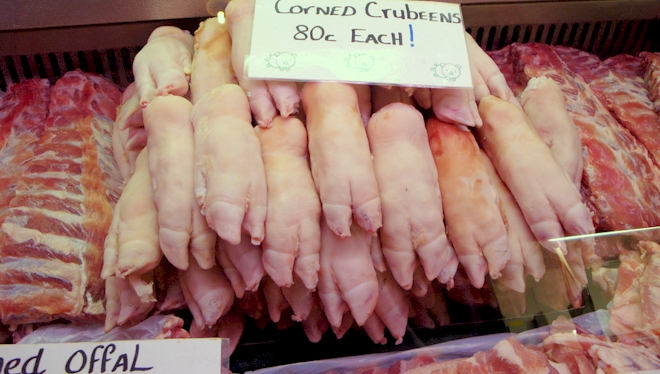 Almost everyone when asked about Irish food mentions two things – Irish Stew and Corned Beef with Cabbage. And almost every visitor to Ireland is surprised to find that neither features all that commonly on restaurant menus!

In fact corned beef is not traditionally Irish at all – but Bacon and Cabbage is.

That isn’t to say that such dishes are no longer eaten, they are, but they are homely dishes, served to family, rather than ones which would be chosen on an evening out. And so their appearance on a restaurant menu is a rarity.

Most traditional Irish foods use simple, basic and cheap ingredients, a reminder of the fact that they originated in a less affluent past. Many have been given a modern twist by a new generation of chefs or incorporated into dishes that better suit the tastes of a more widely travelled population.

Is it really traditional?

Traditional Irish recipes tend to be very simple, with just a few ingredients in most cases. This should be no surprise – it was the food of the poor and they did not have a huge range of exotic ingredients available to them.

So when you come across, as I did recently, a recipe for Irish Brack that included peaches, apricots, prunes and pumpkin pie spices, you can be sure that there is nothing Irish about it – the previous generation of cooks in Ireland would never have heard of some of those ingredients, much less been able to obtain them!

There is a tendency to take any recipe at random, add a dollop of whiskey and then append the word Irish in front of its name! I have even seen it mentioned – horror! – in recipes for bread. Truth is that Whiskey is not much used in traditional Irish recipes – the Irish always preferred to drink it rather than cook with it!

Guinness is a little different – for many years the Irish considered it to be not so much a drink or even a food but a whole food group all of its own! While it may not be traditional in cooking in the sense of going back centuries, it has been used for quite a long time in stews and as a marinade. But again, taking any old recipe and adding Guinness to the mix does not magically turn it into an Irish recipe.

Everything but the Grunt!

Irish tradional cuisine is a peasant cuisine and food in a poor household is never wasted. There is nothing that illustrates this so well as the pig. Few ordinary Irish households in the past would have eaten beef – this was a food for the rich – but many kept a pig and it is said that they ate every part of it except for the grunt. 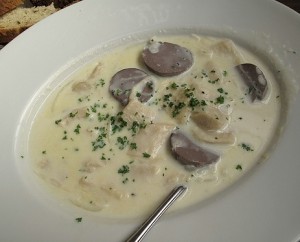 Crubeens (pictured top) or pigs trotters, tripe (pigs stomach) and drisheen (a blood sausage) were all popular dishes and are still eaten in parts of the country, notably Cork.

The killing of the pig was a ritual in which neighbours came together to complete the work, with everyone getting a parcel of meat to take home. In that way each time a pig was killed, several families had food. Since there was no refrigeration, what was not eaten fresh was cured or salted and hence bacon became a very important part of the Irish diet.

When times are hard free food is a real bonus and there is and was (and is) plenty of it available in the woodlands and around the shores of Ireland. 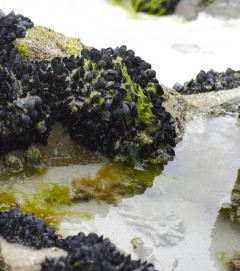 Mussels growing in Connemara by Hachimaki

Summer is berry time and wild blackberries are abundant throughout Ireland as are rosehips and wild strawberries.

The wet warm weather of late summer and early autumn brings mushroom season and wild mushroom can be found in large amounts in both woodland and on pasture, especially following a good rain shower on a warm day.

A little later there are nuts aplenty, in particular hazel and beech nuts and crab apples ripen.

All year round nettles, dandelions and thistles are readily available and very nutritious while elderflowers were (and are) used to make excellent wine or cordial. By the coast there is samphire and various types of edible seaweed.

Rocks along the shoreline are often dense with mussels.  Crabs and shrimp can simply be picked from rock pools when the tide goes out and limpets, clams and periwinkles are also there for the taking

Not surprisingly all of these ingredients feature in traditional dishes.

It’s impossible to talk about Irish food without mentioning the potato. They first saved us then almost destroyed us in history, but there are few households where the potato is not still a staple and anyone who makes even a basic stab at growing vegetables will plant a few spuds in their patch. 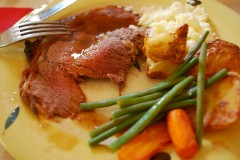 Beef with roast and mashed potatoes by hosullivan

They are eaten boiled, mashed, fried, chipped and baked, mixed with cabbage or scallions to make colcannon or champ, made into potato cakes and used to top pies and thicken soups or stews.

It’s not all about dinner either. The snack that Irish people miss most when they are overseas is Tayto, an Irish brand of potato crisps (or potato chips). There is even a Tayto theme park! And no night out on the town is complete without a feed of chips (or fries) liberally seasoned with salt and vinegar on the way home to soak up the alcohol!

Irish people are fussy about their potatoes. Typically a supermarket will stock at least 5 or 6 different varieties, often more, with the varieties changing depending on the season and each suited to a particular method of cooking.

Of all foods, the humble spud is certainly the most traditional. We may not be dependent on them in the way we were in the past but there are a lot of Irish people for whom a dinner without potatoes is not a dinner at all.