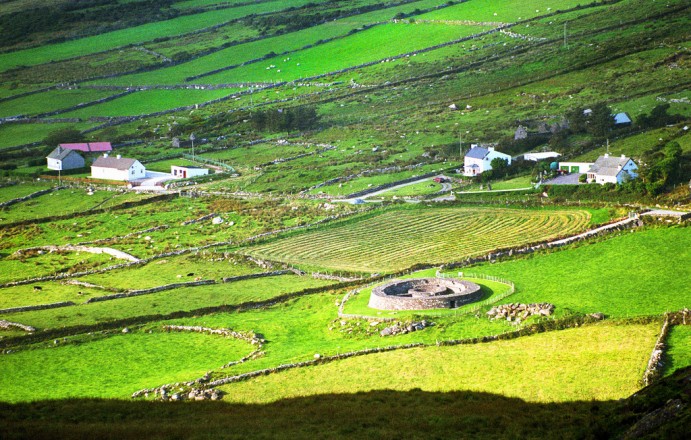 The pre-Christian people of Ireland are of largely unknown origin, though it is believed they arrived here via Britain, possibly from Germany and Austria, even North Africa. They were not literate and no direct written accounts of this time exist, they passed their tradition down by oral means.

Most of what we know about them was either written at the time by Roman observers (though the Romans never came to Ireland) or later by Christian historians who preserved the oral tradition of those they came to convert.

This period if history is often referred to as Celtic Ireland.  The Celtic people of Ireland are said to have been a striking and colourful people, tall, fair and strong with brightly dyed and embroidered clothing, gold and silver jewellery and, in the case of the women, elaborately braided hair. There is practically unlimited imagery even today of them and of their symbols, on clothing, pottery, posters, cards etc all readily identifiable as Celtic.

There is a problem here though: the Celtic people of Ireland almost certainly didn’t exist as a homogenous race, did not arrive as an invading people and much of what we think we know about them was essentially created in the 19th century.

At the time the movement known as the Celtic Revival arose Ireland was ground down both economically and politically. Extreme poverty was a life long reality for most of the population even before the famine caused catastrophic levels of death, homelessness and emigration. Writers and folklorists of the Celtic Revival tapped into a deeply held desire to create a sense of a glorious past with which the Irish could identify and to which they could aspire to return.

The result was the elevation and embellishment of what little recorded material existed about this time – most of it written centuries later – into an elaborate ‘history’ of Celtic Ireland, a long ago time when the Irish and their culture were unsullied by either Christianity or English occupancy.

Nonetheless there is much we know about this period, both from artifacts and structures still remaining and from oral histories written down in the centuries that followed.

During this period Ireland was divided into numerous kingdoms, many quite small, each with its own ruler. It was a hierarchical society, with chieftains or kings surrounded by their nobility, a learned class of scholars or poets, farmers who worked the land and at the bottom of the pile, as ever, those who did most of the physical labour.

Warriors were revered and became the stuff of popular myth and legend for centuries to follow. Chieftains were expected to take an active part in battle and failure in the field of war was catastrophic for their position in society.

While there is no contemporaneous written record of the time that is not to say there was no learning. Rather it was an oral tradition, with history, poetry and stories memorised and passed down the generations by scholars and poets who had high standing in society. This meant that when Christianity came to Ireland – bringing monestaries with their scriptoriums and educated monks – and monestaries with their scriptoriums and educated monks – there was a rich oral tradition to draw on when it came to writing history. 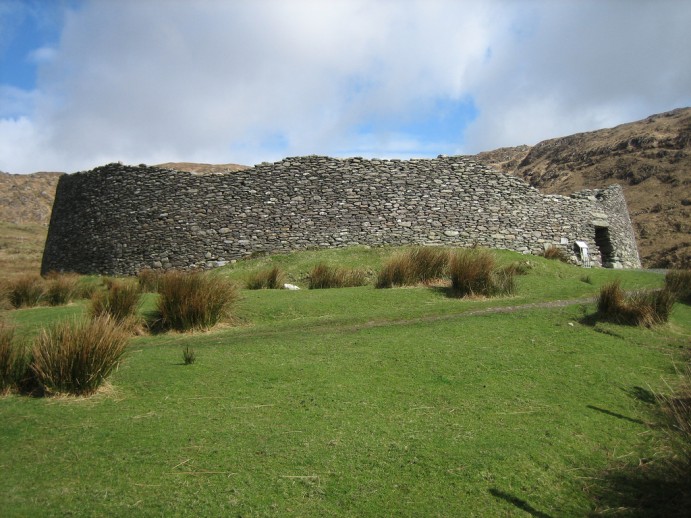 It was during the this period that circular fortified structures or forts that are common in the Irish landscape even today began to appear.

The building of enclosures arose primarily from the need to protect people, because of the warlike situation which constantly prevailed between rival kings and their clans, and also the need to enclose and protect livestock. Most were small, housing single families, but those belonging to powerful chieftains could be quite extensive.

The earliest such settlements were domestic, circular areas surrounded by banks and ditches of earth, sometimes supplemented with wooden palings, where people and animals lived together, protected from potential raiders. Later they became more elaborate. Forts with high and thick stone walls surrounds were built for defense, acting as forts to house armies and protect territory.

While there are many intact stone forts those built from earth and wood have virtually disappeared, though they have left their shadows on the landscape as the image below illustrates (hover to see more). 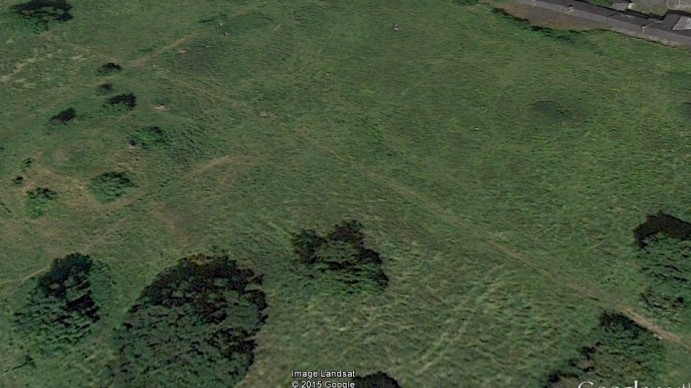 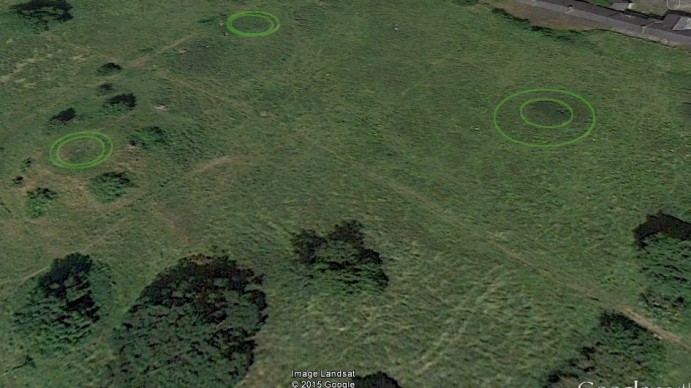 While these are readily visible from above, from the ground there is often little to see. Exploring Google Earth to find some is rewarding – stick to fields along riverbanks for the best results!

These remnants were often believed to be “fairy forts”, home to fairies and never interfered with by farmers, in spite of the years they lay uninhabited. Even now it is a rare farmer who would damage or remove a fairy fort or anything growing on it, though many will vehemently deny believing in fairies! 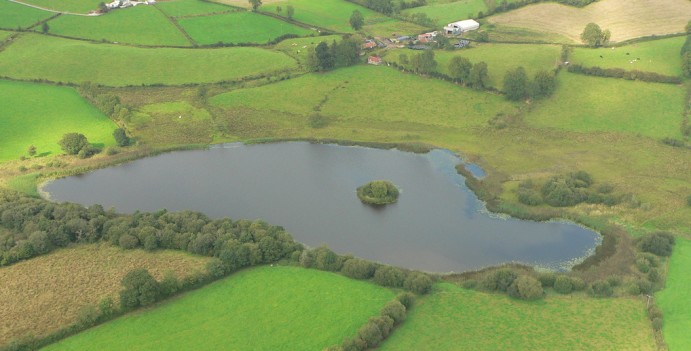 These were a particular type of enclosure built on either natural or artificial islands on rivers and lakes. The islands were created from wood, clay, timber and stone, all held in place by wooden pilings. They could be reached only by boat or via a footbridge which was often just below the surface of the water, and so invisible, or was built to be easily retracted.

There have been many archaeological findings at the sites of crannogs, as so many eventually ended up being submerged or waterlogged, thus preserving the remains. From these it seems that crannogs were not permanent dwellings, but used temporarily for fishing, hunting or industrial purposes.

Several Irish lakes still have small islands which were at one time crannogs. While there are no enclosures still visible on most they are easy to spot, being relatively small and usually circular in shape as in the image above. 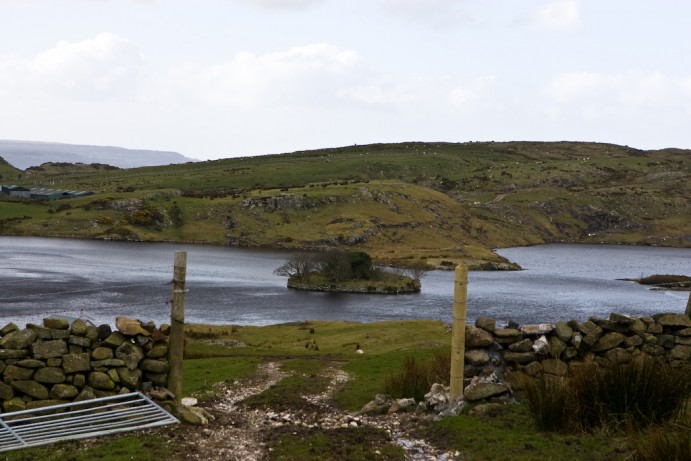 This one, at Fair Head near Ballycastle in Co Antrim is unusual in being surrounded by a stone wall.

It was during the early period that a code of law, known as Brehon Law, that would endure in Ireland for well over 2000 years were first established. These remarkably detailed, egalitarian and democratic laws were at first passed on orally from one generation of ‘Breitheim’, or lawgivers, to the next.

In the 5th century they were written down in five books known as the Senchus Mór or books of law. They are written in a very ancient form of Irish, known only to and passed down by the Breitheim. Those who later undertook translation spent most of their lives deciphering it. 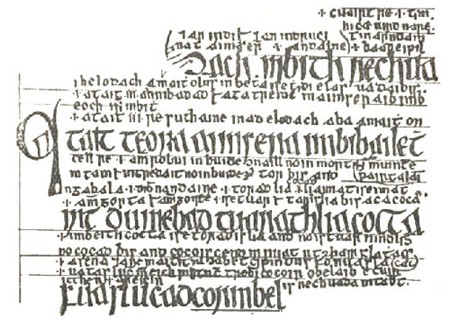 There were some changes made at this time to bring the laws into accordance with Christian teaching. Thereafter it required a panel of nine, from defined diverse backgrounds, to add or alter any law.

The laws covered civil, military and criminal law in minute detail, setting out the rights, and the duties, of people at every level of society. The relationship between landlord and tenant, father and son, professional person and client, master and servant are defined and responsibilities assigned to each. Women were given very extensive rights, including the right to own land and to retain that ownership after marriage.

Rates of compensation for every conceivable type of injury are enumerated as are punishments for a huge range of crimes and transgressions.

Punishments fit not just the crime, but the criminal and the victim also. Thus there was more severe punishment when a thief stole from a poor person rather than a wealthy one and an educated person with power or a position of responsibility would be more severely punished for fraud than a poor or illiterate one.

Brehon Law survived the arrival of the Normans and the English, who for the most part adopted it although it was never officially recognised or approved of by England. Brehon Law remained as the de facto code in Ireland until the 17th century during the reign of Queen Elizabeth.

People at this time lived close to nature and their lives and beliefs reflect that. Sunrise and sunset, the solstices and equinoxes had great significance to them, as did the four major annual festivals: Imbolg in February, Bealtaine in May, the summer festival of Lughnasa in August celebrating the beginning of Autumn and Samhain or the beginning of Winter.

This is reflected in the many remaining structures which are aligned to the rising or setting sun at an Equinox or Solstice, most famously at Newgrange in Co Meath.

Little is known of the detail of belief and ceremony from this period. When the oral history of the time was written down, it was done so by Christian monks and was often reinterpreted in the light of their belief, making it unreliable. 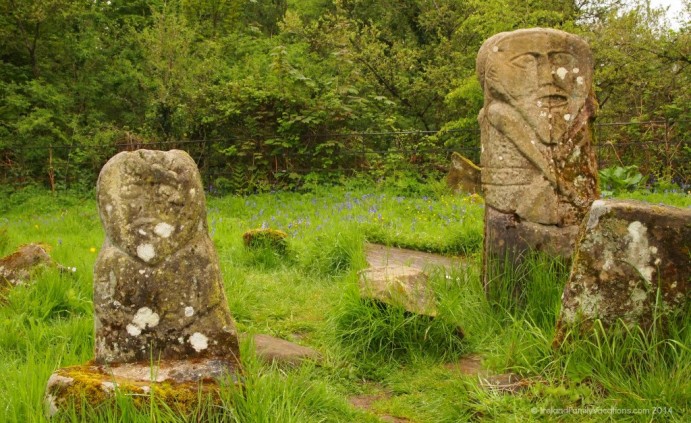 There are hints in archaeological remains however. While depictions of deities are uncommon, those on Boa Island in Fermanagh are at least suggestive of a deity.

At Navan Fort near Armagh archaeologists found what appears to be a shrine with evidence of deliberate intense burning consistent with fire rituals.

Like the shadows of disappeared forts in the landscape, traces of pre-Christian belief remain still in Ireland. Many of the sites important at this time later became, and remain, places of Christian worship. The persistent devotion of many Irish Catholics to holy wells also dates back to a pre-Christian era.

Stories of early Christian saints are frequently no more than a retelling of earlier myth. A case in point is St Brigid, whose exploits are virtually indistinguishable from myths told about a pre-Christian goddess with the same name.

This merging of the past into the present was deliberate and is commonly seen throughout the world when Christianity first arrives. The blurring of old beliefs into new makes conversion much easier.

There is a permanent exhibition of worked Gold artifacts from this period in the National Museum in Dublin.

At Lough Gur, near Limerick, there is an interesting visitor centre with reconstructions of Celtic and pre-Celtic dwelling and some interesting exhibits that shed light on how people lived at the time.

Craggaunowen tells the story of the this period in a very vivid manner, with not only reconstructed dwellings and boats and part of an Irish road dating from the first century BC, but actors going about their lives as dwellers of the area. A little cheesy the last bit, but it works.