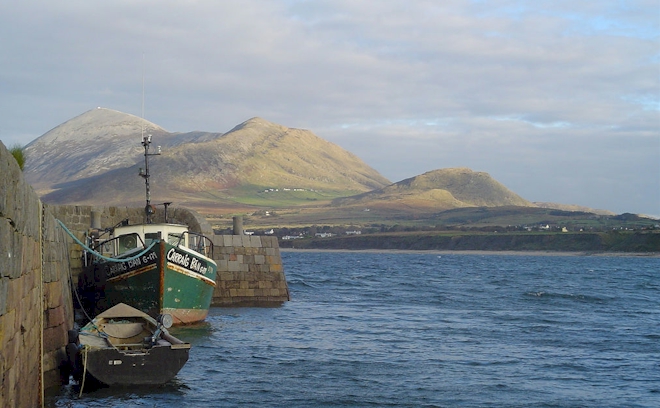 St Patrick reportedly spent 40 days and 40 nights fasting on this mountain in Mayo in 441AD, but its reputation as a holy place and a place of pilgrimage predates even that event.

The name is pronounced either ‘Croke Patrick’ or ‘Crow Patrick’.

Whatever its origin, the annual pilgrimage to Croagh Patrick is one of the most ancient practices in Ireland. Its role as a place of Christian pilgrimage dates back more than 1600 years, and there have been archeological finds there that suggest it had a ritual significance for thousands of years before that. It is believed that there has a continuous and unbroken tradition of climbing Croagh Patrick at the end of summer for at least 5000 years. 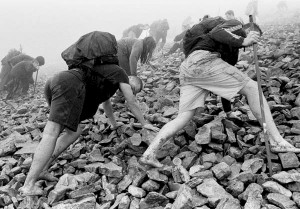 Climbing the Reek by Monosnaps

This melding of ancient Irish traditions with more recent Christian ones is not unusual.

In their efforts to bring Christianity to Ireland St Patrick and those who followed him adopted a successful strategy of holding Christian celebrations in places that were already used for pre-Christian worship, thus easing the transition to a new religion; Croagh Patrick was one such place.

The belief is that it was associated in pagan times with the festival of Lughnasa or the Harvest time.

Nowadays the main pilgrimage takes place on the last Sunday in July, known as Reek Sunday – the mountain is always referred to as ‘the Reek’ locally. On that day upwards of 20, 000 people gather to climb the rough track to the top of the mountain. 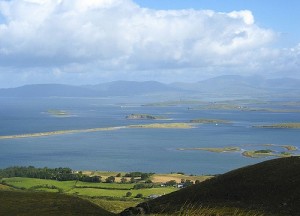 Not all are there for religious reasons, some climb to be part of an ancient ritual, others for the challenge of getting to the top and some to enjoy the beautiful location and views along with the sense of occasion.

While it is not a high mountain, the tradition is that pilgrims should make the climb barefoot, no mean feat since this is no grassy hill – the slope is covered in rough loose shingle and sharp stones. The loose surface makes coming down again as hard as getting up. While in times past virtually all pilgrims were barefoot, it is much less common now, though there are always a brave few who go without footwear – the image above was taken in 2003.

The pilgrimage takes a well defined route to the top, with a number of ‘stations’ along the way where pilgrims recite prayers and perform rituals in order to gain penance.

Masses are held throughout the day in the small church on top of the mountain. Those who make it to the top are also rewarded by magnificent views over the surrounding countryside and over Clew Bay.

This excellent video gives a real feel for what the climb on Reek Sunday is like.

Westport is a thriving town and well known as a centre for excellent traditional music. Nearby Westport House, now open to the public, with its extensive grounds and gardens and a private zoo, is a particularly good place for children. 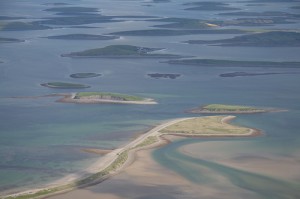 Clew Bay is dotted with hundreds of tiny islands; nobody knows how many there are, but you will almost certainly be told there are 365 (perhaps an extra one pops up in leap years!).

Founded just over two hundred years ago by Lord Altamont Louisburgh is an excellent example of an ‘estate town’ built on the pattern of four streets with a central cross roads.

It is so named because of the family of Lord Altemont’s links to the battle of Louisbourg, Nova Scotia in 1758.

There is a car park and a small visitor center, with toilets, at the base of the mountain.