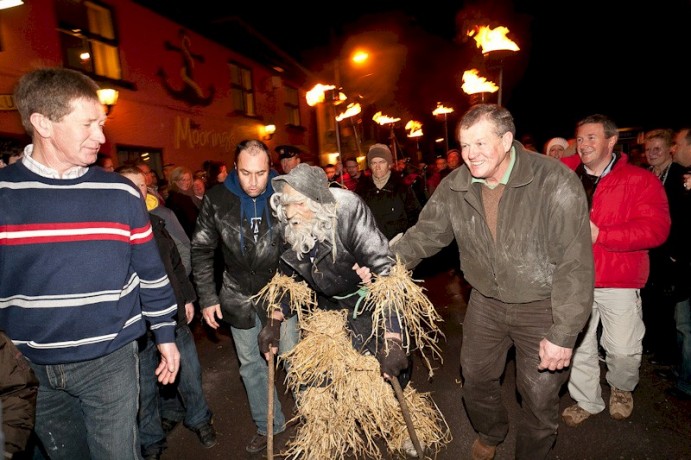 This a great turn on the normal New Year’s Eve theme, which has taken place annually in the small town of Portmagee in Kerry for almost 200 years. I love the whole thing – I think it makes Portmagee the best place by far to spend New Year’s Eve in Ireland.

It began in 1727 when a French ship was in port on New Year’s Eve. Shortly before midnight the crew of the ship paraded through the town carrying lit torches and preceded by a piper. In their midst was an ‘old man’ who, as the parade moved on, became more bent and more ancient in appearance.

On the stroke of midnight a shot rang out, and the old man collapsed to the ground as though dead. But only for a moment. The suddenly he transformed into a lively young man with white trousers, a swallow-tail coat and a top hat. He then retraced the steps of the old man, dancing with joy while the crowd cheered and celebrated as he went.

The old man of course represented the old, dying, year, and the young man the new year ahead, full of hope and possibility.

The local people, at first confused and a little fearful, loved the whole event and have recreated it annually ever since. It’s quite a sight. Torches lit with parafin soaked turf light the path of a local dressed as a stooped old man parade through the town to the pier, where at midnight he is reborn and young again.

The event takes place on the streets of Portmagee, so there are no tickets or admission charges but if you are planning to attend book your accommodation early.

Ailwee Cave, on the Burren in Co Clare, is a great place to visit any time of …

Now in its 17th year, the Listowel Food Fair is the longest running food …