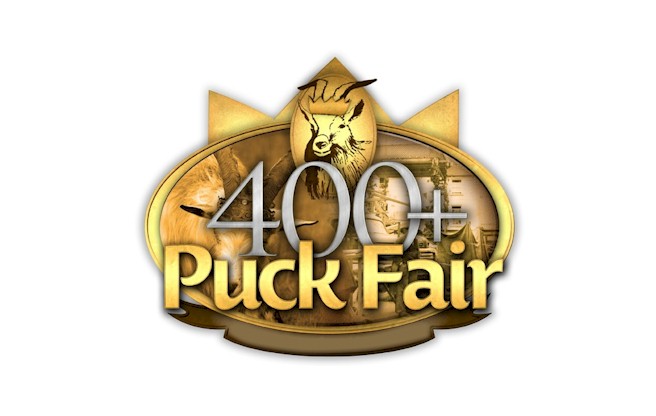 Where do you even begin with Puck Fair?  It’s old for a start, it got official recognition from James I in 1603 and it was probably already ancient at that time.

Basically, this is what happens: 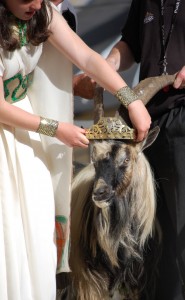 Each year a wild male goat is captured from a mountain and brought into Kilorglin. It is raised on a platform high above the crowd and there a young girl, who has earlier been crowned  ‘Queen of Puck’, crowns the goat King.

There follows much cheering and several days of drinking and general merry making.

There are loads of origins suggested for this goat crowning – ‘goat saved town from Cromwell’ being a popular one.  I find the pagan harvest ritual theory more persuasive: ‘young innocent girl sacrificed to old goat in return for good harvest’. Which makes the annual griping about too much drunkenness and rowdiness seem ridiculous, bacchanalia being rather the point of harvest festivals.

For many of those in attendance the fair is all about business: the buying and selling of horses and cattle (and sheep, donkeys, dogs, geese – anything really). This is done the old way, with deals struck in the street or in a field and hands shaken to seal the bargain. There are also competitions for horses and ponies. 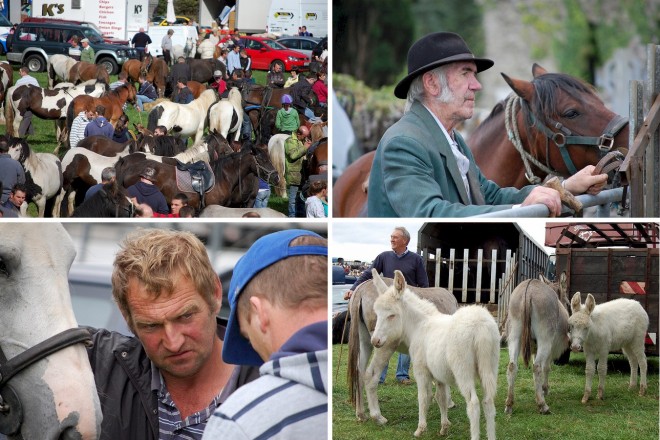 It’s all sort of organised chaos, hard to see a pattern in it if you just wander in but the people involved know exactly what’s going on. Nowadays few animals in Ireland are sold this way so it is like a little glimpse into the past.

Alongside these fairs are a myriad of stalls selling … well, just about everything. Notable are the stalls selling religious icons, statues etc, seemingly unperturbed by the nature of the event they are attending.

What to expect at Puck Fair

During the day it is much more family-friendly, with lots of street entertainment and kids events going on. Music is everywhere, both organised and just from random buskers. There is a party feeling and lots to see and do.

At night the town is packed with a lively drunken crowd, mostly good humoured, moving from pub to pub and or listening to music on the street. By the end of each night – and the end comes late, pubs are open till 3am most nights – the town is a total mess. One of the great wonders of Puck Fair is that a couple of hours later all is pristine again for the start of a new day.

If you go along – and you should, it’s a spectacle worth attending – be a bit careful at night. While it mostly stays friendly, excess drink can bring feelings to the surface and the odd fight does break out. If you feel the atmosphere become a bit fraught around you, just move away to another area – they protagonists won’t be interested in you.

All the images on this page are by one photographer who has two great albums of images from Puck Fair, one from 2010 and another from 2013. They are well worth looking at – they really capture the thing.

Hello world!
Welcome to WordPress. This is your first post. Edit or delete it, then start writing!

Map and Directions for Puck Fair

Details of events taking place can be found at the website, though mostly it’s a street event and the horse and cattle fairs are the thing to see.

This popular jazz event has steadily grown in stature since it started in 2000, …

While classical music – chamber music in particular – is the main …