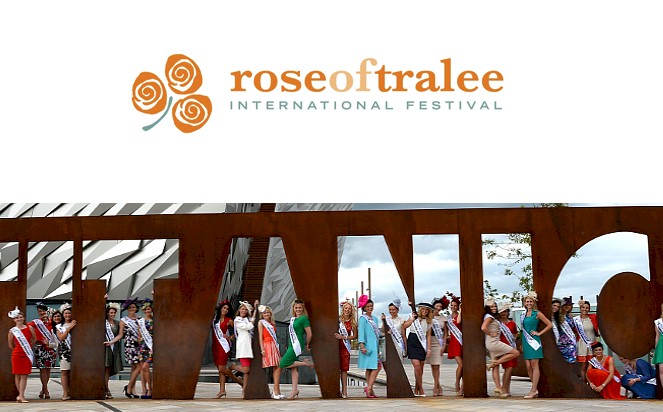 What can you say about the Rose of Tralee? It’s a phenomenon, it seems like an anachronism and yet it goes from strength to strength, attracting huge numbers of visitors from around the world every year.

Based around the famous song “The Rose of Tralee” this is essentially a competition where young women of Irish ancestry from all over the world, take part in a personality contest. Not a beauty contest, though the winner is likely to be at least very attractive. The ‘roses’ are feted during the week of the festival, each is accompanied by a male escort and they attend various events as VIP guests and parade the streets of the town to the cheers of the crowds.

It all culminates in two night of interviews, aired live on Irish television, after which a winner is chosen and crowned Rose of Tralee, and begins a year in the role. While this is the main focus of the week, there are also many events taking place in Tralee to entertain the vast crowds, lots of street entertainment and always something going on thoughout the days and nights.

It’s something of a love it or hate it occasion – aficionados say its the best party in Ireland and more fun than any other festival on the calendar, those who are less enamoured say it’s little more than a drink-fest, and certainly you can expect to see more than a share of drunkenness on the streets, increasingly so as the day, and the week, wear on.

Here’s Maria Walsh, the 2014 rose, introducting a flavour of what goes on.

It is certainly not an occasion for the culture vulture, but if you are young, sociable, up for lots of late nights and looking to party this is the place to be at the end of August.

Years ago a friend of mine reached the final of the Rose (Hi Niamh!), and for all my innate cynicism I was overjoyed when she very deservedly won.

The map below marks the location of the festival dome, where the interviews with the roses and many of the larger events during the week are held.

Sligo Live is an annual festival of traditional, roots and acoustic music.

Limerick City will become a mecca for families, foodies, fun runners and …