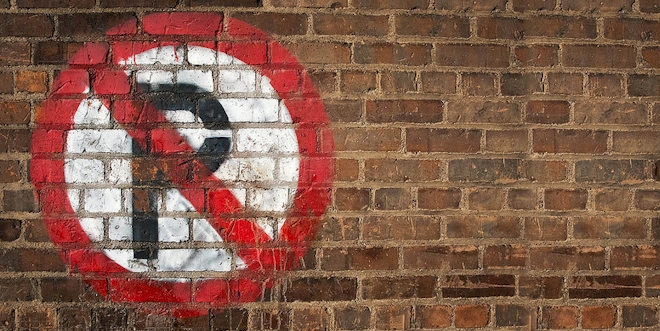 There was a time when road and driving laws in Ireland were honoured more in the breach than the observance but no more. Increased vigilence and larger penalties have had an effect as has the massive growth in numbers of road users, which were the old ways still in practice would quickly lead to chaos.

Even smaller towns how have little on street parking, observant traffic police and enthusiastic traffic wardens. On the spot fines are the order of the day and wide powers to seize vehicles also tend to focus the mind!

Compliance with the law by Irish drivers, in common with those elsewhere, is not universal though it is greatly improved.

You do not need any special license to drive in Ireland if you are from the USA, Canada, Australia or an EU country. If your license is in a non-roman script you will need an International Driving License to either drive here or to rent a car.

The wearing of seat belts in mandatory in both the front and rear seats of a car. Children under 17 must where possible travel in the rear seats of the car, and the law requires that the driver off the car ensure that all children are suitably restrained.. On the spot fines apply to those not wearing seat belts. 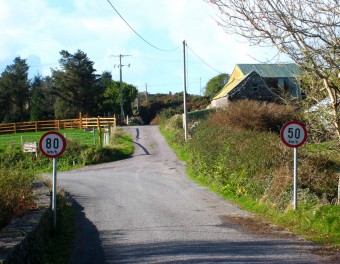 Speed limits are expressed in Kilometers per Hour and well signposted.

The penalties for exceeding speed limits are stiff, there are speed cameras in operation in many locations and your car hire company will quickly receive a fine notice if these cameras spot you – which will be an unpleasant extra cost waiting for you when you return the car. So it definitely pays to be aware of them and to observe them.

A bit hard to do in the case of the image here, where you can take your pick – though given the roads I’d go with the lower suggestion!

There are broadly 4 different types of speed limit in effect on Irish roads, each of which is dependent on the type of road you are travelling on – keep on the look out for speed limit signs.

Remember that the speedometer in your car will read in Kilometres per hour, not Miles per hour!

These apply in areas where there is a particular safety reason for limiting speed, such as outside a school. These can appear suddenly and seem pointless – especially when the school is closed for summer. You may be happily motoring along a quiet road with a 100km limit, when suddenly on a perfectly straight stretch the limit drops to 50km/h.

However daft it seems, observe them, there may be traffic police hiding in the bushes ahead with their speed gun trained on you. (Yes, spoken from bitter experience.)

If you are planning a journey bear in mind that in the area of both towns and places frequented by tourists traffic tends to actually move at speeds well less than the limit.

These are made locally and vary hugely in different parts of the country, even Irish people travelling to another area get very confused, so it is no wonder that visitors are often totally mystified.
Highly enthusiastic parking wardens police the regulations and are very vigilant, some seem to  take an inordinate amount of pleasure in catching transgressors – this I believe is a universal trait!

Illegally parked cars can and will be clamped or may even be towed away and impounded. Many a hapless visitor has gone to the police to report a ‘stolen’ car, only to find it is in the pound, awaiting the payment of a sizeable sum of money before it will be released.

You can take it that parking on the street is severely restricted in most towns and cities in Ireland, and around busy tourist areas.

The signs on the left indicate, respectively, areas where parking is and is not permitted. A total ban on parking is also indicated by a double yellow line on the side of the road, a single yellow line indicates that parking may be permitted at some times, usually at weekends or out of business hours.

Check signs in the area for details carefully while someone is still with the car – don’t just chance it!

Disc Parking or Pay-and-Display parking applies in many places for on-street parking and in surface car parks [parking lots]. These schemes vary from place to place, but generally there are two ways to pay.

Don’t even think about it.

The law is strict and Gardai run regular checks on motorists. The legal limit for alcohol is 50 milligrammes of alcohol per 100 millilitres of blood, which just about allows you to have a glass of wine with a meal – though of course the best and safest advice of all is to avoid alcohol completely if you are driving.

Rain can come suddenly in Ireland, but it is not always a bad thing.