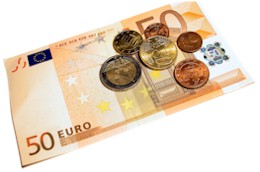 The official currency in Ireland is the Euro. The Euro is also the currency in many EU countries including France, Germany and Spain but not the UK, and therefor not Northern Ireland.

Countries where the Euro is the official currency are referred to as “Eurozone” countries.

The denominations of Euro notes and coins in circulation are the same in all Eurozone countries.

Note: The plural of Euro is ‘Euro’ – not Euros. Similarly the plural of cent is ‘cent’, not cents.

When changing currency avoid getting any €100 or higher denomination notes. These are the most popular notes with counterfeiters and many retailers are suspicious of them and they may refuse to accept them.

Euro notes and coins look much the same in all countries using the currency. On the front that is. On the back, of coins only, each country is allowed to add their own design.

Thus your pocket full of change could have coins originating from any of the Eurozone countries. Some people like to collect a set of Euro coins of each denomination from each of the countries. The banks are not crazy about this, as it takes coins out of circulation.

In fact there is a fairly consistent shortage of 1c and 2c coins, since these are so small, insignificant and valueless that a lot of people just toss them in a jar and never reuse them. The banks don’t like this either.

The Irish Central Bank produces commemorative notes and coins from time to time. You can buy these from their website, but only by post or telephone, not by online purchase. Get with the game boys! More here

Ireland on a Budget / Public Transport

Have you something to add about "About the Euro"?