While banks are probably the best and most economical places to exchange currency, there are many Bureaux de Change where you can exchange smaller amounts outside of banking hours, though they do tend to be quite a bit more expensive. Larger hotels will also exchange currency, again at well above the bank rate. 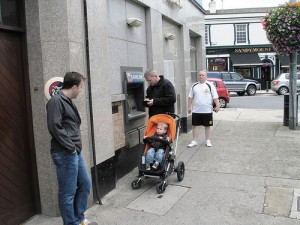 All major Irish bank branches have Automatic Teller Machines (ATMs) which accept each others cards, as well as credit cards and foreign bank cards with the Cirrus or Plus symbols on them.

The ATM will have the same symbols as that on your card displayed if it accepts the card.

Be aware that at busy weekends, and most especially in towns or locations where there is a festival or other special event taking place, ATMs can run out of cash. It is a good idea to make sure you have sufficient early in the day.

As everywhere, be careful when you use an ATM – if there are people hanging about that you don’t like the look of, or the machine seems out of the ordinary in any way, move on and find an alternative one. No point in taking risks.

All larger towns have a Post Office which acts as the local office for Western Union. Post offices are open from 9am to 6pm, Monday to Saturday, some close for an hour at lunch time.

Loads of foreign banks have currency or investment departments in Ireland. These have been omitted, the ones listed should be able to assist ordinary mortals who are customers in their home country. It’s not a long list – we are trying to find more.

Using the rail network can be a good way to tour Ireland, though it has …

Since the introduction of the Euro, Ireland has shared a currency with many …