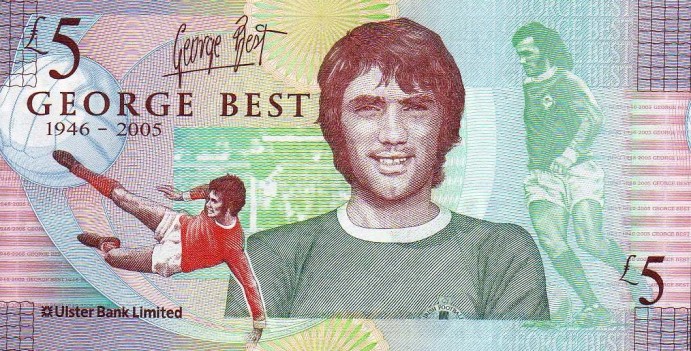 In the UK, thus in Northern Ireland which is part of the UK, the currency is Sterling.

Many shops in Northern Ireland, especially those near the border, accept Euro. You will however need some sterling if you are planning to go north, especially small denomination notes and coins for car-parks [parking lots], bus fares, tips and the like.

Like the republic, there is no shortage if ATMs in the north and you’ll have no problems using them. They will, of course, dispense money in Sterling.

Northern Ireland is one of the few places where private banks are still allowed to issue banknotes. While standard sterling banknotes, issued by the Bank of England and circulated throughout the UK, are common in Northern Ireland, more often the notes you see will be issued by individual banks in the province. This happens in Scotland also.

There are four banks allowed to issue their own notes in Northern Ireland, so potentially if you had five £10 notes, they could all be completely different in appearance. Yes, it is confusing.

These notes are not “legal tender” – but don’t panic, that doesn’t mean they are worthless! They are what is known as “commonly accepted” and can be used anywhere in Northern Ireland. 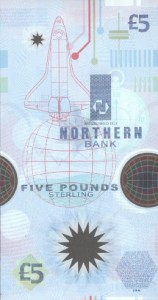 Either spend or exchange notes issued by Northern Irish banks before leaving Northern Ireland, even if you are travelling on to other parts of the UK, since most shops outside Northern Ireland will look on them with suspicion and may refuse to accept them, which they are allowed to do.

Alternatively you might take some of the more unusual notes home with you and sell them on eBay, where collectors will pay a little more than face value for them – or even a lot more.

The highly sought after George Best £5 note pictured at the top of the page is worth about four times its face value to a collector.

If you happen to find the limited edition polymer £5 note, issued by the Northern Bank to celebrate the millennium, in your change – you’ve hit the jackpot. It had a print run of only about 2,000,000 notes and will never be reprinted so has particular value, especially since many people have squirreled them away as souvenirs.

Don’t say we suggested selling them though, I’m not sure it’s legal!

Although homosexuality was not decriminalised in Ireland until 1993, things have …

Have you something to add about "Money and Banking in Northern Ireland"?