Home » Visitor Info » Preparing for your Trip » How to Behave in Ireland!

How to Behave in Ireland! 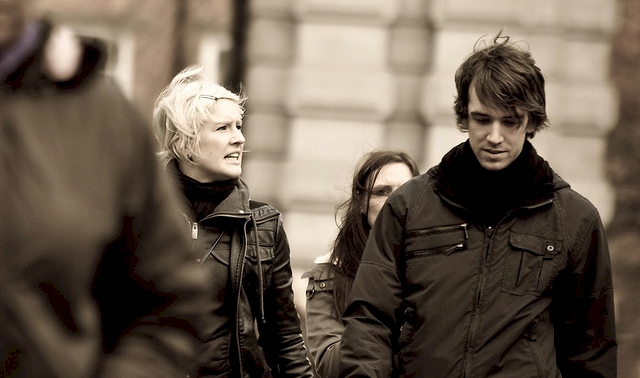 For the most part Irish people are relaxed and laid back and welcome all visitors warmly. But it’s useful when visiting a foreign country to have some idea of how things are normally done – it helps to avoid misunderstandings and to smooth social interaction. 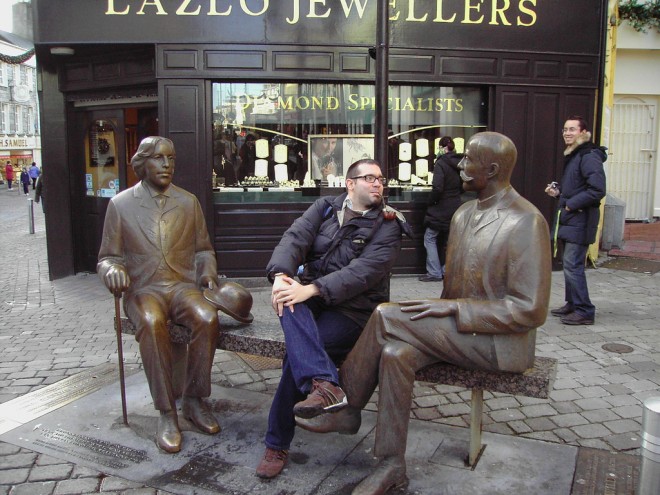 Chatting with Joyce and Wilde

Keep it casual is the best advice when meeting people in Ireland. Irish people are naturally gregarious and talkative and will happily chat with total strangers, falling easily into conversation while waiting for a bus, standing in line in a store or traveling on a train.

The preferred topic of conversation in such situations is often the weather – there is always plenty to discuss when it comes to Ireland’s weather!

Unless you are prepared to be disagreed with and to engage in lively debate, it’s probably best to avoid politics. This is especially true if you are American and want to talk US politics – Irish people not only have strong views about domestic politics but are generally well informed and up for a good argument about US politics too.

Avoid being overly critical of anything in the local area. People are very proud of their place and don’t like to hear it criticised by ‘outsiders’ – even if they will happily moan about the very same things among themselves! The upside is that most people are pleased to be asked for recommendations about things to do and see in the locality, giving good advice about places to eat or to find entertainment, and will often go out of their way to ensure you get the best from your visit to their home town.

People will frequently say “hello” or “nice day” or just nod and smile a greeting when passing a stranger on the street, though obviously not so much in more crowded places! This should not be seen as an attempt to start a conversation – just smile back, return the greeting and carry on. 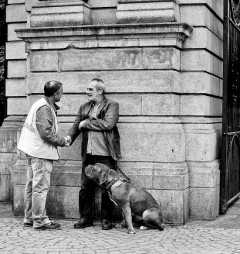 When first meeting someone or on encountering an acquaintance, people may shake hands or not even do that on informal occasions – a friendly greeting is often enough.

Relatives and close friends often kiss each other on one or both cheeks, continental style, a habit that is becoming more widespread in recent years, but this would not be the norm when greeting strangers.

When driving on narrow country roads, where cars are few and speeds are low, drivers meeting an oncoming vehicle will acknowledge the other motorist by raising a hand or a finger from the steering wheel in salutation. It doesn’t necessarily mean they know the driver of the other car, they’ll greet everyone this way and a response in kind is expected.

In the Pub: Observing Custom 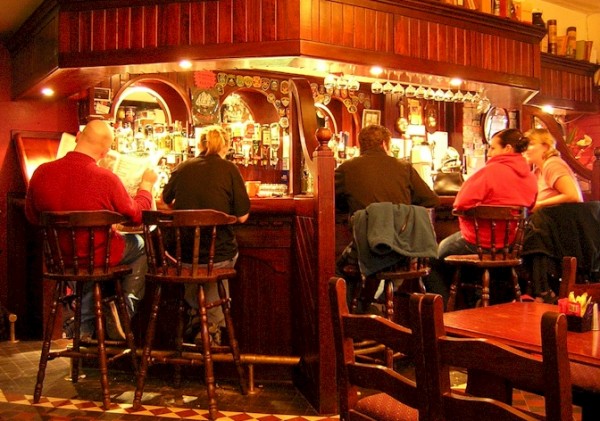 Relaxing in Murphy’s in Dingle by TMWeddle

The pub in Ireland is more than somewhere you go to drink, it’s a meeting place and there will generally be regular customers present who know each other well, even if this isn’t immediately evident to someone walking in for the first time.

This is particularly the case in rural pubs, less so in very large pubs in towns and cities. However people in pubs are there for the social occasion and are so are happy to talk to visitors and to include them in conversation.

How to Order & Pay

Most pubs do not have table service. You go to the bar, order and pay for your drinks and can then chose to remain at the bar to drink them or take them to a table. In larger pubs, especially in cities and at busy times, and in pubs where food is served, table service may be available, but you can still choose to go to the bar and order yourself.

There is no tab system in Irish bars. You are expected to pay for your drinks as and when they are ordered. The exception is in a hotel where you are resident, where you can add them to your room bill.

As a general rule of thumb if you sit (or stand) at the counter other customers are likely to strike up a conversation with you, if you take your drinks to a quiet table in the corner they will leave you alone. 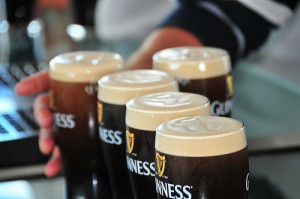 Round of pints, by Francesco Crippa

When in the company of a group of people in a pub, a system of ’rounds’ is traditionally used, whereby each person in turn will buy, or offer to buy, a drink for all others in the company.

It is not the done thing to just buy yourself a drink without making the offer to buy one for everyone else – those who fail to do so risk being looked upon as mean and unsociable. Possibly the most damning thing an Irish person can say about someone is that they ‘never stand their round’.

While it is quite acceptable to turn down the offer of a drink when someone else is buying a round – just say ‘I’m alright, thanks’ – you don’t get to skip your turn just because you are not thirsty!

The best advice for dealing with the rounds system is to get in with your offer to buy as early as you possibly can – come in with your offer (“Can I get you a drink?”) just before the fastest drinker in the party has emptied their glass. Otherwise you can end up drinking a lot more than you intended to while waiting for your turn to come – and you daren’t leave before it does unless you want to earn an instant reputation for meanness!

Tipping in Ireland: When & How Much 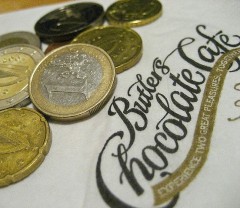 Tipping is not as universal a practice in Ireland as it is elsewhere. Most restaurants apply a service charge which theoretically replaces the tip, but if service has been good an additional tip of about 10-15% is about right.

Some more casual restaurants have a plate or bowl at the cash desk where you can leave a tip to be distributed among all the staff. Unlike the situation in the USA, wait staff do not depend on tips for their income, though they certainly appreciate acknowledgment of a job well done.

Taxi drivers, hairdressers, spa staff and others are generally tipped about 10%. Hotel porters and room service staff will usually expect something round €2-€5 depending on the extent of the service provided.

Drivers/guides on tour buses are usually tipped at the end of a trip, sometimes with a communal tip collected from all of those on the tour. The amount is up to the individual, and will depend on the length of the tour and the quality of the service.

Owners of B&Bs do not expect to be tipped, nor do they expect gifts.

Tipping staff in pubs is a special case. While staff who bring drinks to a table may be given a small tip, those serving from behind the counter don’t expect tips and if you leave money on the counter will probably assume you have forgotten to pick up your change and return it to you.

If you do want to give a tip to bar staff, the polite way is to hand over a sum of money approximately equal to the price of a pint of beer while saying something like “Have one for yourself later” – theoretically you are not giving a tip, you are buying a drink at some future time, which is far more acceptable. 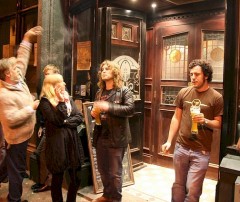 Smoking outside the pub by Gryts

Since March 2004 it has been illegal to smoke in any enclosed public space, which includes bars, restaurants, shops, offices, public transport, cinemas – pretty much all indoor places except your home or a designated smoking bedroom in a hotel.

The ban on smoking brought with it a massive increase in sales of awnings and patio heaters as pubs made arrangements for their smoking customers to enjoy an outdoor cigarette in some level of comfort – many pubs, hotels and restaurants how have designated areas for this purpose.

Don’t be tempted to try to beat the smoking ban by lighting up indoors and pleading ignorance, it will not be tolerated by those around you and there are hefty fines for transgressors. 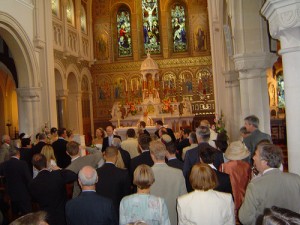 At a Wedding, by David Boyle

Irish people are not as observant of religious practice today as they were in the past and regular attendance at church services have been falling for quite a few years. Many people now attend primarily for ‘hatches, matches and dispatches’, rarely entering a church at other times.

However you will still commonly see people make the sign of the cross when passing a church or a graveyard, and hear people say things like “God bless” for “Goodbye”, or “God speed” for “bon voyage”. A few will sprinkle holy water on departing cars, or even people, to keep them safe on their journey! 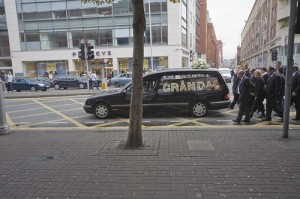 Following the hearse, by infomatique

Funerals in Ireland are very public occasions and you may come across one in your travels. It is traditional for people to walk behind the hearse as it goes to the church or graveyard and there can be hundreds, occasionally even thousands, of people walking in procession in this way when a funeral is taking place.

It is expected that anyone walking or driving on the street at the time will stop and remain stationary while the funeral procession passes, shops may turn out their lights or temporarily close their doors and bystanders will bless themselves or say a quiet prayer.

No special dress code is required for entering churches, such as applies in some parts of continental Europe, but you are expected to be quiet and respectful and particularly so if a service is taking place during your visit.

Many visitors are a little shocked to hear how often Irish people say “Jesus” or “God” in everyday conversation, not in a prayerful way but as an expression of surprise, frustration or annoyance. However it sounds this isn’t intended in a blasphemous way, it’s just a sort of verbal tick that has become habitual for many.

The use of “the F word” is also very common in public, it’s even, strange though it may seem, often used in a friendly way. Just ignore it, for the most part it isn’t meant to shock or to be interpreted as an aggressive thing, it’s just a very unfortunate national habit.

Please, I am begging you, do not greet people with “Top of the morning” or say goodbye to them with “May the road rise to meet you”!

Nobody Irish outside of a bad movie has ever said any of these things, or used any of dozens of other so-called ‘Irish sayings’ in normal conversation, and they make our teeth curl.

Odds & EndsPreparing for your TripUseful Information for visitors to Ireland