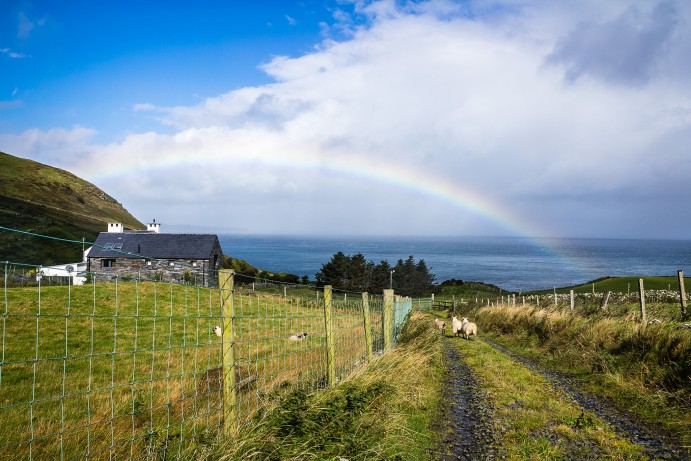 It’s often said that in Ireland you get four seasons in one day, and there is some truth in this! Irish weather is never very predictable, no matter what the season or how bright the morning dawns.

During the summer months, while rainfall is frequent it is generally light or short-lived. In Summer there can be surprisingly warm weather, on occasional days temperatures can get up to 25- 30ºC (75-85ºF). Many days dawn misty and overcast only to become cloudless and warm by late morning. And the opposite can happen too: a beautiful sunny morning can give way to a cloudy wet afternoon.

It can become humid as the temperature rises – sudden and heavy (though usually short) thunder storms are common. On the up side, these storms are followed by spectacular rainbows which almost make up for them.

Average temperatures in Ireland in January and February (usually the coldest months) are about 5ºC (41ºF), though they can drop quite a bit lower at night. Clouds and rain are pretty much a daily occurrence, with occasional bright sunny days. However most days, even if it is dull, rain tends to come in showers interspersed with dry periods.

Heavy snow falls are rare. January 2010, when heavy snow and ice almost brought the country to a standstill, was exceptional.  Most years the tops of mountains may be covered with snow for much of the winter but you are unlikely to encounter snowy roads. Ice is a different matter, and early in the morning, particularly on less busy roads, it is advisable to be on the look out for black ice.

Spring and Autumn are even less predictable – you could find yourself soaking up the sun in April but equally you could really need that warm and waterproof  jacket you packed – you did pack it didn’t you?

So essentially in Ireland the weather could do anything – be prepared for that!

These figures are all average weather values for Ireland over an approximately 30 year period.

How often does it rain in Ireland?

Essentially there are more days when it rains that when it does not, but it’s the amount of rain that matters, so they’ve been split into rain and heavy rain. The heavy rain is the kind that interferes with outdoor activities or at least makes them a lot less pleasant.

This graph makes one thing crystal clear: there is no point trying to pick a month to avoid rain- there is no dramatic difference between different times of year, whenever you visit it will rain.

How warm or cold does it get in Ireland?

I’ve used Fahrenheit degrees in this graph, but obviously the trends are the same no matter what you use. For those more familiar with Centigrade measurement, the highest temp on the graphs would be 31°C and the lowest -14°C.

Note that highs and lows of temperatures are real extremes, over the 30 years of these statistics they might have happened only once.

How often is it sunny in Ireland?

The best way to measure this is average hours of sunshine daily. If this looks a bit depressing,  with a high of only around 5 hours of sun a day,  bear in mind that it’s an average. In all seasons there are days of no sunshine and others where it shines all day long.

What about other weather conditions?

Climate & WeatherPreparing for your TripUseful Information for visitors to Ireland

The Story of Irish Crystal

Crystal has been made in Ireland since the late 1700s, when the development of …