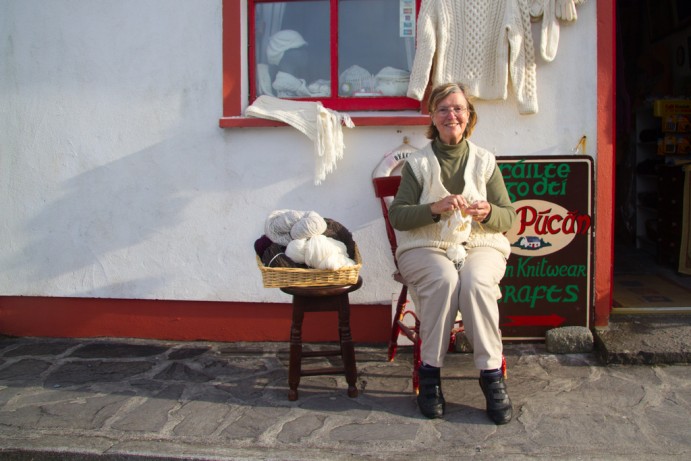 Aran knitwear is often on the shopping list of those visiting Ireland, and with a little care it can be a very good purchase. Choose the right one and you will have a beautiful, useful and durable sweater that will be admired for years.

A lot of lore and myth has grown up about Aran Sweaters and Aran knitting and stitch patterns in general. Some have a grain of truth but most are pure hokem.

Let’s dispel a few of them right away!

Sorry to burst your bubble on this one, but there are no family or clan aran patterns, such as are found with Scottish Tartan.

In spite of this fact you will find plenty of places on the web perfectly happy to tell you how each family has its unique pattern and sell you a sweater in “your family Aran pattern”. It’s unadulterated nonsense, pure fiction; they made it all up as a sales tool because there were so many people who believed such a connection existed.

Only about a couple of dozen or so family names are associated with the Aran Islands in any case. In most other Irish families there is no tradition of either knitting or wearing Aran sweaters at all, and even on Aran the ‘tradition’ is relatively new.

The belief partly arose from stories of the bodies of Aran fishermen who drowned being identified by their ‘family’ sweater. Nobody was ever identified in this way; again, it’s all fiction. There is some tiny grain of truth deeply buried in this mess – many knitters had favourite stitches and pattern combinations which they reused often and which would be easily recognisable to other knitters.

No clan patterns then, so just pick a sweater you like, whatever name is on it, and enjoy it for what it is.

The Spread of Myth about Aran Knitting 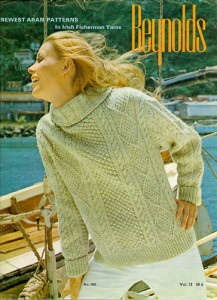 Aran knitting is not an art that stretches back centuries, the people of the Aran Islands neither made nor wore what we now call Aran sweaters before about the mid-20th century and the stitches are not ancient and symbolic. So how did these myths become so widely accepted as fact?

In the 1930’s Murial Gahan, who owned a restaurant and craft shop in Dublin, visited the Islands and took some samples of the knitting she found there to sell in her Dublin shop. These were not Aran sweaters as we know them now, but an earlier form of patterned knit. There they were ‘discovered’ by a German visitor, Heinz Kiewe and that was the begining of decades of misinformation.

Kiewe developed a theory, based on little more than his own intuition, that the sweaters had been knit for generations on the islands, that the patterns used were ancient celtic ones and that there were images of Aran clothing in the Book of Kells. Although Kiewe had never been to Aran, he attributed meanings to the various stitches based on what he percieved or imagined to be the Aran lifestyle.

In 1967 he published a book, “The Sacred History of Knitting“, in which he expanded on his ideas, although remarkably he had still never visited the islands.

This book expanded in great detail on his ideas, creating an elaborate history of knitting stretching back centuries, describing and attributing ancient signifigance to patterns and  generally telling a story that was compelling and fascinating.

The problem is that none of it was based on fact, historical or otherwise.

That trivial detail didn’t stop other authors assuming it was true and spreading it as fact, and the book was widely used as a source by people writing about Aran knitting. That nobody in Ireland or on the Aran Islands ever went to great lengths to correct the inaccuracies is, if you think about it, unsurprising – it truly was a marketers dream!

Reclaiming the Truth about Aran

The two people are most responsible for getting back to the truth about Aran are Scottish knitting writer Alice Starmore, who dug beneath the widely-believed myths and winkled out the truth for her book “Aran Knitting“, and Richard Rutt whose book “A History of Hand Knitting” was first published in 1987. This is how it really came about.

The first known patterned sweater from Aran dates to about 1930 and is in the National Museum in Dublin. It’s not quite what we know to-day as Aran knitting, but you can see the relationship. This sweater resembles those created on the Scottish isles in many respects and it is possible that around this time at least one skilled knitter from Scotland was on the islands, perhaps working in the fish industry there, and brought a basic knowledge of stitch patterns to the Island women.

By 1946 sweaters knit in a style and construction that is more distinctively Aran had started to appear, as shown in a sweater from this period in the National Museum. The Islands by this time had become quite well known for their style of knitting, but it was produced only on a very small scale.

In the 1950s and 1960s, in an effort to provide a source of income for isolated Aran Islanders, commercial hand knitting was encouraged. It was seen that the Island women, who had little prospect of other employment, could produce a product readily saleable on the mainland. Knitting was taught to children in schools and to groups of women on the Island.

By the early 1960s the sweaters had fully evolved into the distinct and recognisable form familiar today and began to be widely produced and sold.

So, how Irish is Aran Knitting?

Completely Irish, and it there is no dispute about its origin in the Aran Islands. Some people have expressed dismay that something they believed was an ancient traditional craft was in fact of recent origin and always commercial in nature. They shouldn’t.

It is immensely to the credit of the women living on the remote Islands of Aran in the mid-20th century that they developed and created an original style of knitting with such wide appeal.

Their lives were as different as it is possible to imagine from those of their customers in Dublin, London, New York and other far flung places in the world. And yet they responded to the needs of their markets, concieved a myriad of beautiful and original knitting stitches and brought tremendous skill to bear in the creation of sweaters that were treasured for decades by their eventual owners.

It does no justice to these remarkable women to belittle their acheivement or their creativity or to devalue their sweaters just because they, and not their forebears, came up with the style of knitting.

The currency of Northern Ireland is sterling, and although some stores close to …

How to Beat the Weather in Ireland!

Irish weather is notoriously changeable, but if you are prepared will not …