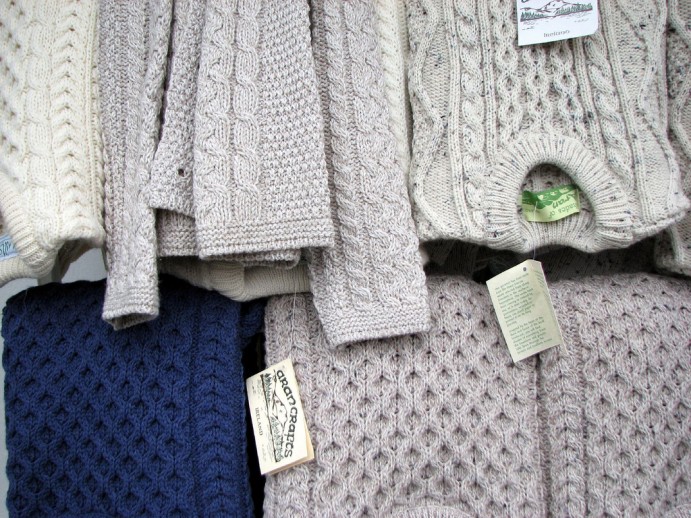 Not all Aran Sweaters are created equal, here are some of the things you should consider before you buy.

The difference is significant, as are the prices, so it is helpful to be able to distinguish between them and decide which is for you.

Hand knit Aran sweaters are knit usually by women at home as a part-time enterprise, are the best quality and the most expensive. They tend to be knit tightly and from heavier yarn, so the patterns are very well defined. There are some Aran stitches too intricate for any machine and thus only seen in hand knit sweaters.

Hand knit Aran sweaters are long lasting, keeping their shape and stitch definition for many years. Consider buying a size up as they will not loosen with use and washing. Expect to pay upwards of €200 for a hand knit Aran Sweater.

Hand-loomed means that a person operates the loom directly and can make stitch adjustments between rows. This allows the loom operator to build up the intricate patterns of Aran row by row, and the best hand looms are capable of producing very high quality sweaters.

They are usually made from good quality wool, though sometimes wool blends are used, and are quite close to hand knit in appearance, but lighter and thinner with less depth and definition in the pattern. They are intermediate in price, usually between €80 and €150.

Machine knits are generally thinner and have a flatter texture. They will loosen with wear, so buy a size down. They will have less intricate patterns, are often produced from lower quality wool or blended yarns and will be by far the least expensive and also the least long lasting.

Machine knit Aran Sweaters can be found for around €40-50. Often department stores selling reasonably priced clothes to the Irish market are better places to buy these than shops aimed at tourists.

2. Weight and Type of Yarn

A good quality Aran sweater should feel heavier than you expect when you pick it up. Traditionally Aran sweaters were made from untreated, undyed sheep’s wool. These were a bit scratchy and uncomfortable and are rarely found now, though in some cases some of the natural lanolin is retained. The yarn used now is most often treated and dyed pure wool. Look for a tightly twisted yarn, which is not too soft to the touch. Soft wools will lose the stitch definition over time, tightly twisted tougher wools will not.

While traditionally only pure wool was used, there are now Aran style sweaters knit from wool blends, cotton, linen or silk available. They may not be the traditional knit but they can be very beautiful.

Authentic sweaters are available in any colour that sheep come in, since they are undyed. The traditional colour is a creamy off-white, but with dyed wool more commonly used all sorts of colours are available now. Because the attraction of an Aran sweater is in the intricacy of the stitch patterns, mixed colours tend not to work too well as the patterns become sort of lost.

Personally I think that Aran looks best in muted natural tones like oatmeal or heather.

Where to Buy Aran

There are stores all over Ireland selling Aran and other Irish knitwear, some very good, some selling cheap imports, so be cautious. These are some of the best places to buy sweaters and other types of Aran Knitwear, such as scarves, hats and so on.

Ó’Máilles of Galway
Family run store which is years and years in the business, with a huge range of high quality stock and very friendly and knowledgeable service. If you want an authentic hand knit sweater, this is the place to go.

An Púcán Craft Shop
On the Aran Islands and selling locally produced hand knit and hand-loomed sweaters, this is a very good place to go for the real thing.

Blarney Woollen Mills
In Dublin, Cork and elsewhere, they have a broad selection of Aran sweaters, mainly good quality hand-loomed. Very good for other styles of Irish knitwear too.

Why you should buy the real thing: Hand Knit Aran

It’s a lot more expensive to buy true hand-knit aran than either loomed or machine knit, so why should you spend the extra money?

Well, aside from the better quality which means you’ll be handing the sweater down to the next generation, you will be buying something that may not even exist in the not too distant future. In an interview for The Wild Geese Anne Ó Máille had this to say:

I’m very worried about the future.  As my knitters grow older, I realize that only two people under the age of 60 are knitting for me … I do not have any knitting force of talented women coming up to fill their places.  And that tells its own story.

So there may not be much time left to buy a real hand-knit sweater – you will be buying something that will become a collector’s item eventually.

The currency of Northern Ireland is sterling, and although some stores close to …