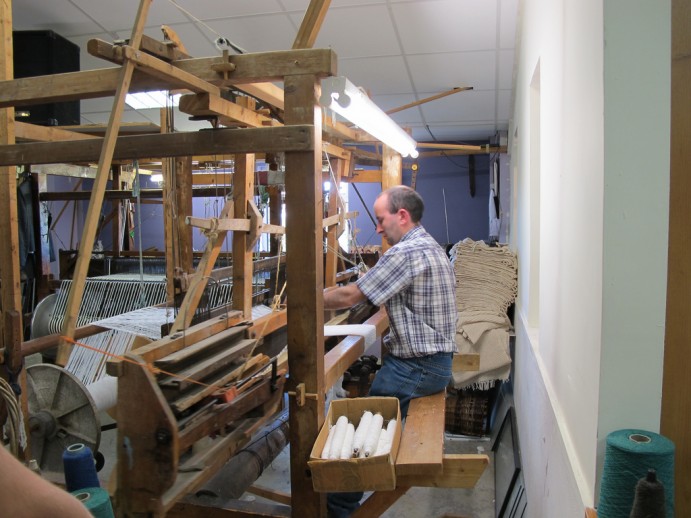 Tweed has been produced in the Northern counties of Ireland, primarily Donegal and Tyrone, for many generations. Originally a cottage industry with entire families involved in spinning, dyeing and weaving local wool.  When tweed making later moved away from homes and into mills it became more industrial, but the tweed was still hand-loomed.

Today most manufacturers of tweed produce their fabric industrially using power looms. But there are still those who stick with the old methods, using hand looms operated by highly skilled weavers producing very high quality tweed in both traditional tweed patterns and innovative new designs.

This tweed is very much a premium product, highly sought after by international fashion designers. Donna Karan, Ralph Lauren, Armani and Hugo Boss are among those who regularly feature hand-loomed Irish tweed in their collections.

If you are buying Irish tweed, look for hand-loomed. Yes, it will be more expensive, but it’s the real thing and its higher quality means you’ll be buying a garment that will be in your wardrobe for many many years.

Irish tweed is known for its natural colours – mossy greens, the soft purples and and blues of heather, deep berry colours and earthy browns and golds.

This is not surprising, as originally the dyes used were entirely natural, made from lichens, flowers, berry and other plants in the surrounding countryside. In fact the colours of tweed could be said to be the colours of Ireland, as you can see in the picture below. 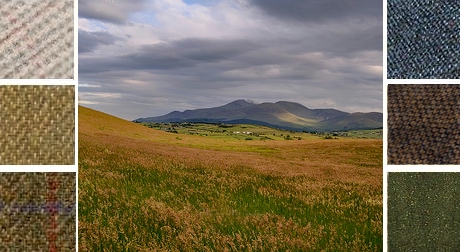 Photo of Mourne Mountains by by Ryan McD

While nobody goes out collecting berries or moss for the dyes today, much of the tweed produced still uses these natural shades. However more vibrant modern tweeds are also produced for a younger market, along with a more contemporary range of clothing which might surprise those who think only of traditional jackets and hats.

A hat made from a good hand-loomed tweed is warm and naturally water resistant as well as beautiful and will last for years, acquiring a comfortable lived in look with wear.

Classic tweed jackets, for either men of women, never date and have a smart casual appearance that is very in tune with a ‘country-living’ style. Look for finer weaves of tweed and go for the hand-loomed variety as it will have a longer life.

Although you can buy jackets off the shelf, having one specially made for you from your chosen fabric while not exactly cheap is probably less expensive than you imagine – expect to pay from €400 – €500 up for a classic outfit you will wear for years.

For a gift, a tweed tie is a good option at less than €20 for a hand-woven tie that will last a lifetime.

Where to Buy Irish Tweed

Probably the largest producers of tweed in Ireland are Magee of Donegal, whose stores you can visit in Donegal Town and also Wicklow St in Dublin.

Kevin & Howlin, on Nassau St close to Trinity College in Dublin, has been selling tweed jackets, suits, hats and other items for more than 70 years, and are still owned by the same family. They stock a wide range of ready made clothing but can also make  jackets, coats and suits to order, for both women and men. This is a good place too for buying tweed fabric and they are happy to take orders from their website.

McNutt’s Tweed Shop & Factory, Downings, Co Donegal produce a very good range of not just tweed goods but top quality items in wool and linen also and their shop is very much worth going out of your way for.

John Molloy Tweed have stores in Ardara, Glencolumbkille and Donegal town, all in Co Donegal. Their online store seems to be unavailable for the last while, hopefully it will be back in action soon.

Irish lace, modern or antique, is hard to find and expensive, as the tradition …

Driving in Ireland / Ireland on a Budget

Save on Car Rental in Ireland

Where, when and how to get the best value when you book car rental for your …