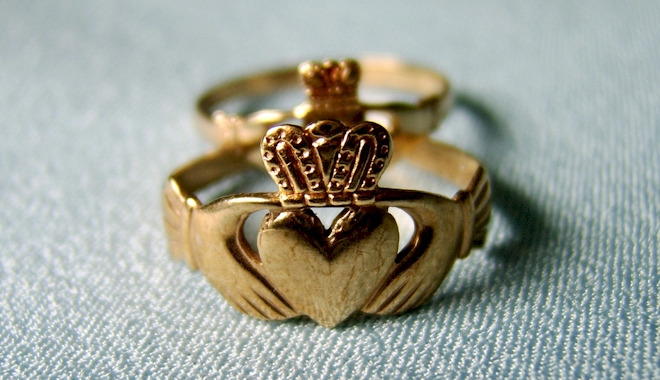 This traditional Irish friendship or lovers ring gets its name from The Claddagh, once a small fishing village, now subsumed into Galway City.

The earliest known version was created by Richard Joyce, a goldsmith, in the early 1700’s and although it was apparently a popular design at the time it died out following his death. 100 years later the design was taken up by several other Galway jewellers and has been made constantly since.

Origin of the Claddagh Ring

Theories abound about the origin of this ring, but the truth is that nobody is really sure.

One story has it that a ring was dropped by an eagle into the lap of a relative of the jeweller, a woman called Margaret Joyce, as a reward from God for her charitable works.

However attractive a tale it may be, this seems unlikely.

A more likely theory is that it was designed by Richard Joyce after he returned from a period abroad spent mainly in Spain and North Africa.

The story goes that he was captured by pirates during his sojourn and sold as a slave in Algiers. There he was purchased by a goldsmith and learned the trade he would later bring home to Galway. There is little documentary evidence that any of this actually occured however.

The ring certainly has a somewhat Moorish/North African look to it, with nothing at all Celtic about its design.

What is the Meaning of the Claddagh Ring? 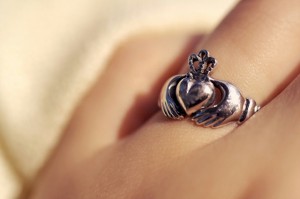 Wearing a Claddagh ring by Jox

The traditional design is fairly simple – a crown atop a heart held in two hands.

Together they are said to symbolise the qualities of a good marriage or a true bond between two people: love (the heart), friendship (the hands) and fidelity (the crown).

It can be worn four different ways, each said to have a specific meaning:

Where to Buy a Claddagh Ring

While the rings, and the Claddagh design in other items of Jewellry, are available pretty ubiquitously in Ireland, the best place to buy has to be Galway, home of the Claddagh. And in Galway the best place to buy is the venerable firm of Fallers, jewellers to the city since 1879. If you cannot make it to Galway, Fallers have an online store and will be happy to assist.

Emergency Contacts for Visitors to Ireland

When something goes wrong in a foreign country, it's easy to panic.

You may not always be allowed to take photos indoors, and even when you are you …