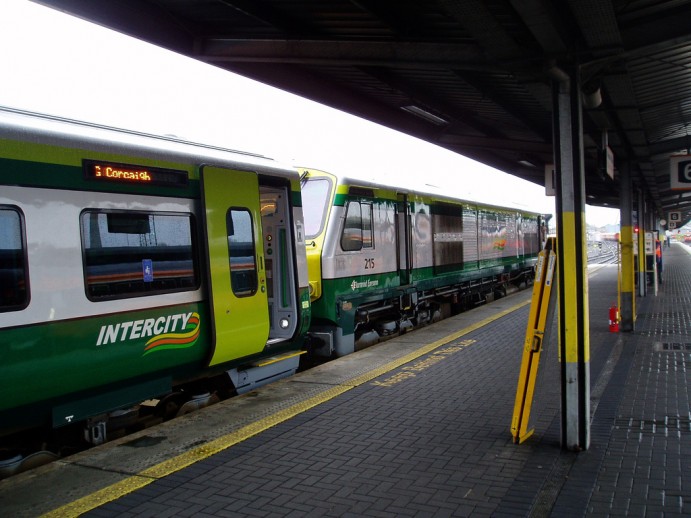 The train network in Ireland is not really a “net” – it is more like a fan, with trains radiating primarily from a central point (Dublin). The outer destinations are largely unconnected.

For example to go from Cork to Kilkenny, a distance of about 150km by road, involves going from Cork to Dublin, changing train and then starting out for Kilkenny, which by road would be a journey of over 400km. Including waiting around for train connections this could mean what would be a road trip of less than 2 hours by car could take  as long as 5-6 hours by train.

You can see the problem.

This is somewhat compensated for by bus services connecting outer regions, but does make train travel a frustrating experience at times. There are also considerable portions of the country not served by trains at all.

On the upside, you are allowed to take your time to complete the journey and can disembark at intermediate stations, have a look around and then continue your journey on a later train.

The rail network in Ireland is run by Irish Rail, a state owned company.

Trains are in general punctual and comfortable, though some are due to be upgraded and it is easy to see why.

Trains are often very crowded. This is especially true of:

At those times especially it is important to arrive early if you want to have a seat on your journey.

On crowded trains passengers unable to find seats are allowed to stand. Given that there are few or no handles for them to hold, this is a practice which has obvious dangers in the event of an accident, aside from the discomfort of traveling this way.

The Irish Rail website has extensive route and timetable information. There is also an online booking service and if you know where you are going that is the cheapest way to book.

There is extensive information here about types of tickets and passes that can be purchased for train travel, most of which include at least some bus travel also.

Not many visitors are aware of the very good value train tours provided by Irish Rail, mainly departing from Dublin. They depart daily during the summer months, visit a wide range of destinations and there are several packages available that include accommodation.

Tours range from one to nine days long. Prices range from less than €20 for a one day Dublin Bay tour to almost €1500 for a nine day tour all along the north and west coast in high season, including all hotels, most meals and day tours and admission costs in each location.

These can be an excellent and cost effective way to tour Ireland for those who prefer not to drive.

Eating on the Train

Intercity Trains will have a dining car where surprising good, if expensive, meals are served.

There are also trolleys which move through the train selling hot and cold drinks, sandwiches and snacks. Again these are expensive and the food provided is at best so-so, it may be better to take your own snacks along.

While there are first class tickets available on some trains, it is not always a good idea to book them. There isn’t a huge upgrade to facilities, second class (once you get a seat) is comfortable, and the price difference does not really justify itself. It certainly is not on a par with the difference between, for example, 1st class and economy on a flight.

The main difference is quiet. First class carriages are mainly used by business travels who want to work, so there will be nobody playing music aloud or having high pitched conversations. On the downside, you will not fall into conversation with anyone, which can be one of the great pleasures of train travel in Ireland.

On some trains you’ll also get the option of buying a meal served at your seat – though the cost of the meal is extra.

If this is worth the extra cost to you then go ahead and book it.

When you book online you can reserve your seat free of charge on many, but not all, trains. You can ONLY reserve a seat when your ticket is booked online.

Go ahead and do this, but be warned that it is not unusual to arrive at your designated seat to find it already occupied. Thus you still need to arrive as early as possible for the train and be prepared to stand your ground and get the seat that is yours.

Travelling with Dogs or Bikes

Dogs and bikes are allowed on trains. There is an additional charge of between €2.50 and €5 for each.

If there is one thing you will not be short of in Ireland it is photo opportunities.

Have you something to add about "Train Travel in Ireland"?