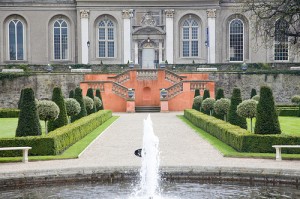 Since its establishment in 1990, IMMA has become one of the most popular visitor attractions in Ireland, and certainly the most visited art gallery, and deservedly so.

Not only is the collection a must for anyone who has even a passing interest in modern and contemporary art, but the building in which it is housed and the surrounding grounds are worth a visit in their own right.

This is Ireland’s leading contemporary Art Gallery, with a permanent collection of more than 1,600 works, primarily comprised of the work of Irish Artists but with a strong international contribution also. Among the artists represented are Gilbert and George, Marina Abramovic, Rebecca Horn, Dorothy Cross, Damien Hirst, Francesco Clemente, Tony O’Malley and Peter Halley. 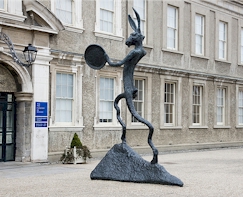 There is a varied programme of exhibitions, each lasting about three months, which include the work of leading figures from the International art world as well as work from emerging artists both from Ireland and abroad.

IMMA run an Artists Work Programme which provides residencies for young artists, both Irish and from abroad, who are given spaces in converted coach houses close to the gallery in which to develop their work practices.

Exhibitions of the work of resident artists can be seen in the Process Room in the Gallery and the artists are also involved in regular slide talks, studio visits, panel discussions and open days.

The Gallery Building – The Royal Hospital

The gallery is situated in the Royal Hospital in Kilmainham, a restored 17th-century building which for almost 250 years,  from 1684 until the early part of the 20th century, was a home for old, sick and disabled soldiers.

Built under the patronage of James Butler, the Duke of Ormond and resident of Kilkenny Castle, it was intended from the start to be a distinguished building, classical in style and with incredible attention to detail. 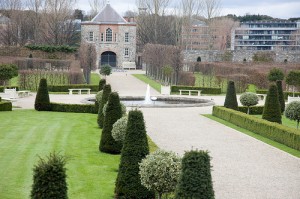 The design is based on that of Les Invalides in Paris with a formal facade around a courtyard and extensive gardens laid out in a classic French style.

It closed as an old soldier’s home in 1927 and then became a police headquarters until 1950, after which it was mostly unused and gradually fell into some decline.

Restoration began in 1980 and continues still and the building has been largely restored to its former glory.

In addition to its role as a gallery, there are also banqueting and conference facilities at the Royal Hospital and recently the grounds have for the first time been used as a venue for open air concerts.

Leonard Cohen was the first artist to appear there, in June 2008. I was there, and it was a magical event in which the wonderful location played a significant part.

Admission to the gallery is free and there are guided tours of the grounds hourly each day except Monday during the summer. Details of special events and current temporary exhibitions are available at the IMMA website.

The Royal Hospital is on the route of Dublin’s Hop-on Hop-off tour buses and a short an pleasant walk though the grounds at the back of the gallery will take you to Kilmainham Goal , so combining visits to the two is a good strategy.

Location Map for The Irish Museum of Modern Art (IMMA)

Have you something to add about "Irish Museum of Modern Art"?