Home » What to See » Art Galleries » The Hugh Lane Gallery 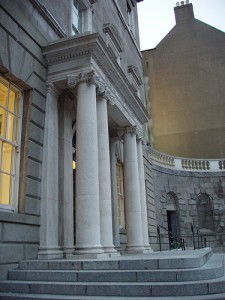 Now owned by Dublin Corporation, when the Hugh Lane Gallery was established in 1908 it was the first ever public gallery of Modern Art in the world.

Its founder, after whom it is named, was a renowned collector of European impressionist paintings who was determined that Dublin would have a gallery fit to display both them and work by contemporary Irish artists, and to make them available for public viewing.

The initial gallery was a in a temporary location, and the latter years of his life Hugh Lane fought hard to secure a suitable permanent building.

Sadly, he died in 1915 when the ocean liner Lusitania was torpedoed by a German U-boat and sank with the loss of 1,198 lives. The gallery moved to its current building, Charlemont House, in 1933, and although he didn’t live to see it there, Dublin owes a great deal to him for his work in making it happen.

The permanent collection spans a period from the late 19th century right up to to-day. Among the earlier works are paintings by Manet, Monet, Degas and Renoir, as well as their Irish artists Walter Osborne and John Lavery.

Work from the 20th century is primarily that of Irish artists, with notable pieces by, among many others, Jack B. Yeats, Sean Keating, Mainie Jellett and Maurice McGonigal and also includes stunning and exuberant stained glass by Harry Clarke. 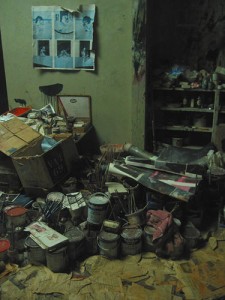 A notable acquisition which is really quite an amazing sight, is a precise reconstruction of the studio where the Irish born artist Francis Bacon worked for more than 30 years.

It was removed with great care to Dublin from London, complete with contents, and rebuilt exactly as it was in every detail.

This was no mean feat. It is without doubt the most extraordinarily messy room you are ever likely to see, with paint pots, brushes, newspaper clippings, books, magazine, canvases and innumerable other items piled chaotically on every available surface, including the floor.

The part of the room pictured here is typical of how it looks, but Bacon liked it that way, saying

“I feel at home here in this chaos because chaos suggests images to me“.

The Gallery is open from Tuesday to Sunday all year round and is just a few minutes walk from O’Connell St. Many bus routes pass close by. Admission is free.

They cater particularly well for kids, with paper and crayons available at reception, regular art workshops for kids and family events. They even have a dedicated website for their younger visitors.

Have you something to add about "The Hugh Lane Gallery"?