Home » What to See » Art Galleries » The Lewis Glucksman Gallery 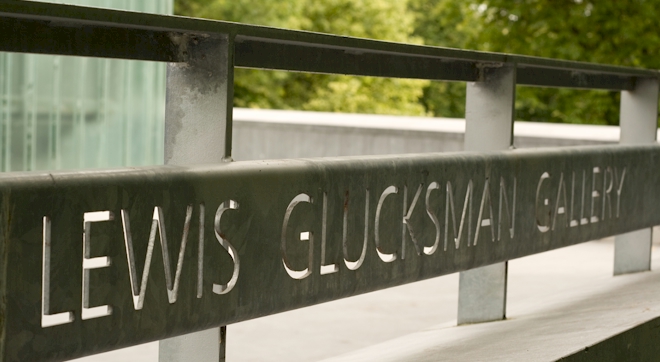 Located at the gates of University College Cork, this is Ireland’s newest gallery and includes display spaces, lecture facilities, a really superb riverside restaurant and a gallery shop.

The gallery has become a centre of Cork cultural life. There are regular lunch time and evening lectures, guided tours, panel discussions and courses for both adults and children.

It is a particularly child friendly gallery and kids over about the age of 8 will enjoy it enormously.

The gallery belongs to University College Cork (UCC) and houses at any time a portion of their good and growing permanent collection of contemporary Irish art, comprising more than 350 works. Others are on display around the campus buildings and grounds.

There is a changing programme of temporary exhibitions, usually 2 running simultaneously. These are loosely built around a core theme of the unique role of visual media in communicating knowledge. 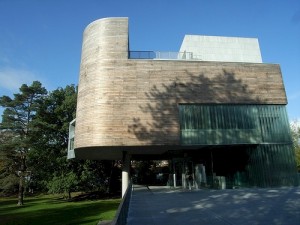 The award winning building is a as much worth visiting as the art inside, and has won multiple awards, including one for Best Public Building in Ireland.

It was designed to be in sympathy with its surrounding and most of the gallery is raised on stilts which make it seem at time to float over the river that runs beside it.

The fact that old trees on the site were carefully retained makes it as though it has been there much longer than is the case – it was completed in 2004. The dramatic entrance is approached over a footbridge and gives a real sense of entering a special place.

A must see for anyone visiting Ireland’s ‘real’ capital! 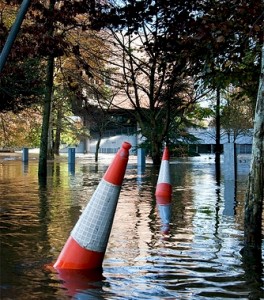 On 17 November 2009, following several days of torrential rain, rivers in Cork city burst their bank and there was flooding throughout the city. The storage area of the Gallery, containing almost 200 artworks, was flooded.

Gallery staff and others responded rapidly and removed them to safety, though not before some had sustained serious damage. Many are still undergoing restoration, but most are expected to be saved.

As a result of the flood, the popular gallery café along with a number of rooms on the lower floor which were used for education and as offices remain closed. However exhibitions continue and a fund has been established to repair and reopen the closed areas.

Lewis Glucksman was an American businessman and philantopist who through his Irish born wife came to know and love Ireland and after many visits throughout his life retired to a house in Cobh in 1998.

As well as this gallery, he was instrumental in the building of the Millenium wing of the National Gallery in Dublin, the Glucksman Library at Limerick University and the new headquarters for the Coastal and Marine Research Centre in Cork.

Aside from the vital financial contributions he made to these projects, his energy, vision and unwavering commitment to excellence motivated all who came in contact with him.

The gallery is open Tuesday to Sunday, with late opening on Thursday until 8pm.  Details of current exhibitions and special events at the gallery website. Interns are available to provide guided tours, which must be booked in advance.

Map and Directions for Glucksman Gallery

Have you something to add about "The Lewis Glucksman Gallery"?