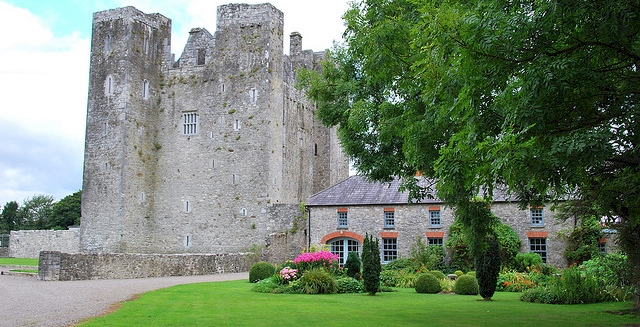 Barryscourt is a typical 15th century tower house, a small ‘domestic’ scale castle which was for centuries home to the Norman De Barry family. There is evidence that this site has been occupied for as long as 1000 years, and Phillip De Barry built a castle here in 1202, but the present tower dates from around the mid 16th century.

While primarily built for habitation, tower houses are typically well fortified, in a country where most families were involved in almost unending conflict defence was always an issue.

That defense was an important consideration when the castle was built is clear if you look at its windows. On lower floors they are small – difficult targets for any one attacking the castle but ideal defensive positions for those inside. It is only on the third and fourth floors that there are large windows and the rooms here are much brighter and more pleasant inside.

Barryscourt differs from many tower house in a number of respects. One is its intact and large bawn, a courtyard protected by high thick walls with defensive turrets at the corners. There is a small chapel, an unusual feature for building of this sort.

It also has a sort of extension to the tower – a large room which runs right along one wall of the bawn and which is believed to have been a banqueting hall. This room is almost 50m long, and must have been the scene of many great parties down the centuries!

All of this speaks of a family who had wealth and influence, and the De Barrys certainly fit the bill. They came to Ireland via Wales in 1185 and were given large tracts of land in East Cork by King John of England. They later acquired the title of Earls of Barrymore.

While living in Barryscourt the family built a hunting lodge at Fota Island. In 1824 they extended it into the large and impressive Fota House, to which they moved, abandoning Barryscourt.

After it was abandoned it fell quickly into disrepair and by the 1980s it was in a sorry state. It is thanks to the dedicated work of the Barryscourt Trust and its prime motivator Noel Jameson that it is now in such wonderful condition. A major restoration project was undertaken with government funding and the castle’s future now seems secure.

The Barrymore branch of the family eventually died out, but the Barry name is alive and well in Cork to-day. The most notable holders of the name are the makers of Barry’s Tea, one of the most popular teas in Ireland and now exported all over the world. 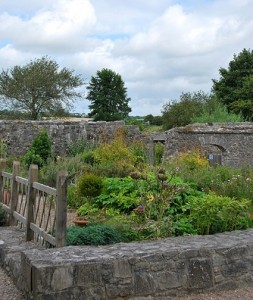 As part of the restoration of the Castle, considerable care has been taken to furnish it in the style of the 16th century.

The result is an exciting glimpse back in time at how people lived, with simple wooden furnishings and wall hangings, rough but cleverly made and practical utensils and and bare or lime washed stone walls. There was some comfort – on a cold day the four poster bed with its sheepskin spread can look very inviting indeed!

Outside work is ongoing on the recreation of a typical medieval garden, incorporating a knot garden, a very fashionable feature of the time.

Barryscourt is well worth a visit and makes a good companion for a visit to Fota House. It is open year round, though hours are curtailed from October to May. It is located off the Cork-Youghal road near Carricktwohill and is well signposted.

Free entrance for holders of a Heritage Card

There is a small café in one of the outbuildings and also a number of craft workshops which are worth spending some time in.

Galway is a compact city, easily explored by foot in half a day.