Blarney Castle is a must see destination on many an itinerary but all too often a sore disappointment. If there is one place in Ireland designed for tourists only, this is it. It’s not all bad, but read on if you are in the process of deciding whether it warrants a place in your itinerary.

Story of the Castle 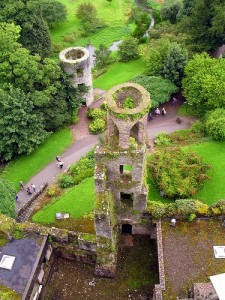 The castle that now stands at Blarney is a 15th century building which replaced an earlier 11th century one destroyed by fire.

From the time it was built until the late 1600s it was home to the McCarthy family. Sadly they backed the wrong side in the Battle of the Boyne and lost the castle and its ground when King William was victorious.

In 1703 the castle was sold to Sir James Jefferyes, Governor of Cork, whose descendants still own it.

It is partially in ruins, though there are a few rooms, including the Great Hall, that can be visited. There is not much of distinction about it, but it’s a nice enough castle.

The view of the gardens and the surrounding countryside from the top of the castle makes the climb up worthwhile – though as you can see from this image, it may not be for those who don’t have a head for heights! 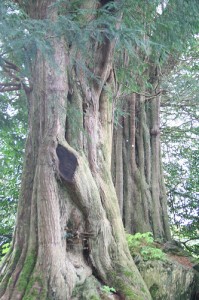 Trees at Blarney by wmshc_kiwi

The gardens around the castle are beautiful and very well kept, with signposted walking paths which point out items of interest along the way as you walk through the old woodlands and down to the lake.

There are in particular some wonderful old and gnarled trees and a pretty little waterfall as well as some old buildings, stones and steps to which are attached stories of frankly dubious veracity.

Nearby Blarney House, built in 1873 in a Scottish baronial style, is now home to the owners and is also open to the public. It’s a bit of a monstrosity, but interesting in that it it gives a glimpse into the life of a privileged Victorian family. 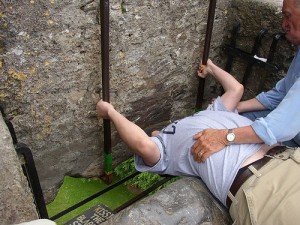 Kissing the Blarney Stone by brosner

The old tale that kissing the Blarney stone confers loquaciousness, or ‘the gift of the gab’, has been a big draw for many years.

Although the origin of the myth is sketchy to say the least it has been hyped up to great economic effect.

Getting to the stone means joining a long line to climb arduously to the top of the castle before hanging upside down to kiss a wall that has already been slobbered on by countless visitors that day, not to mention previous years.

If that does not put you off try this quote from a local who worked there in his schooldays:

“When all the tourists had gone for the day, we used to piss on the Blarney Stone. It gave us a strange feeling of superiority when we saw tourists kissing that place where we had seen our own piss.”

Since I first wrote about this it has been picked up and discussed at several forums and discussion boards, where there are many people who doubt the veracity of the peeing story.

It’s a story that has certainly done the rounds, and I freely admit I didn’t hear the quote first hand but also have to say that when I did it had the ring of truth for me.

That quote is old, I can’t say whether it still happens, my hunch is it isn’t common but that now and then it just might.

If paddywhackery and all things “Oirish” are what you are after you will be delighted with this place. And those willing to keep their tongues firmly in their cheeks can have a bit of fun with it – it’s all a bit of a laugh and a good laugh does nobody any harm!

It is also a worthwhile climb on a good day just for the amazing views from the top of the castle. However, be warned, it is an extremely popular stop for tour buses, so at high season can get a bit too crowded and be almost too much hassle to bother with.

There is more information about visiting at the Blarney Castle website.

Castles & Historic HousesPlaces to Visit in Ireland CorkFun for Kids

Have you something to add about "Blarney Castle"?