In the 1790s Armar Lowry-Corry, the first Earl of Belmore, commenced work on a house which he was determined would outdo in both style and grandeur that of his brother in law, the Earl of Enniskillen, at nearby Florence Court.

Castle Coole is the result, and while it did what he desired it left him almost bankrupt and he died before it was complete.

The Lowry-Corrys had lived here for more than a century already by this time, for most of that period in a house built by Colonel James Corry in 1709. A catastrophic fire in 1797 destroyed this house almost completely.

The original plans for the present house were drawn up by Richard Johnstone, a Dublin architect who was responsible for that city’s Gate Theatre, but later a second set of plans were commissioned from the fashionable English architect James Wyatt, who adapted and improved the original design.

The Castle is not really a castle in the sense that most people understand the term, but a perfect example of a Neo-Classical country house. Built from Portland stone specially imported from Dorset it has four “fronts”, each one as perfectly proportioned as the others. 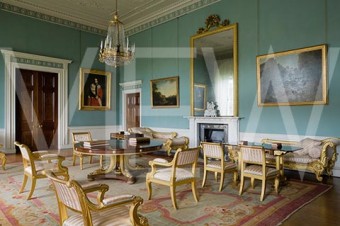 Probably the greatest joy of the Castle is its interior. From the start it was finished to the highest standard, with intricate plasterwork, inlaid mahogany doors and beautiful marble mantle pieces. Everything seems perfect, nothing over the top, the decoration applied with a restraint which while it may have been rooted in a dwindling budget had an elegant outcome.

Remarkably almost all the original furnishings are still intact and in the house today. Most of these are in sumptuous Regency style, with copious fringing and rich colouring. There are glided cabinets, silk curtains, richly carved and upholstered chairs, all still where they stood more than 200 years ago.

This is partly because the same family has continued in residence from the start, but also because of the prudence of the Second Earl, who when he ordered furniture from the leading Dublin upholsterer of the day, John Preston, was also supplied with at least two and sometimes three sets of protective covers for each piece.

The oval ballroom, surrounded by Corinthian pilasters and with particularly fine plaster work on its ceiling is furnished with rich gilding and heavy red silk curtains. It is not hard to imagine elegant balls and parties taking place in this room.

Upstairs the bed in the lavish State Bedroom was specially made for an expected visit by King George IV. The curtains alone for the bed and windows in this room cost over £1000, the equivalent of which today would be well over $100,000. It certainly is a room fit for a king, but in the event he never came.

Sadly the grounds have fared less well than the interior over the years. Only traces remain of a once great formal garden, while an avenue of oaks which once led from the new to the old house is reduced to just a few trees.

A lake close to the house is home to a flock of greylag geese introduced in at the turn of the 18th century by Colonel James Corry . It is said that if these geese ever leave the lake, then the Lowry-Corrys will leave Castle Coole. So far the geese are still there and so, more than 300 years later, are the family.

Castle Coole is to-day in the care of the British National Trust, who have done a magnificent job of restoring and maintaining it in its original splendour.

It is open every afternoon except Thursday from June to August, weekends only during April, May and September. Access to the house is by guided tour only. Tours by arrangement at other times of the year.

The castle can also be hired for weddings or other events.

This museum is home to a remarkable collection of Irish and European art, …

Have you something to add about "Castle Coole"?