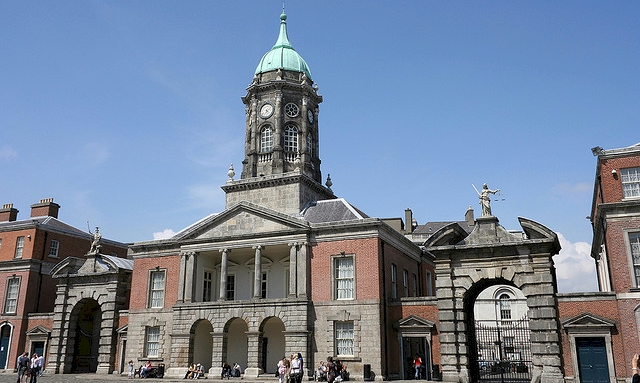 Dublin Castle was built in the early 1200’s by the Anglo-Normans on the site of a 9th century Viking fortress.

From being in the hands first of Viking invaders and acting later as the centre of English rule in Ireland for over 700 years, it is not without considerable symbolism that the Castle is now the location where all presidents of Ireland are sworn into office, from the first, Douglas Hyde, in 1938. 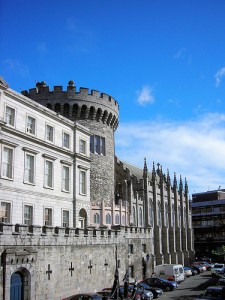 The only remaining part of the original Castle is the Records Tower, most of the rest was destroyed in a catastrophic fire in 1684, shortly after which most of the buildings we see to-day were constructed.

Arranged around two courtyards, most of the buildings are accessible to-day only by guided tour, and it is a tour well worth taking. 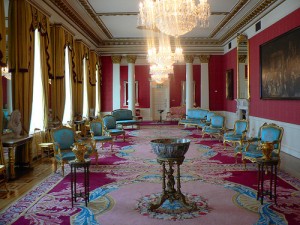 The tour passes first through the State Apartments including the Throne Room is where presidential inaugurations take place.

The throne itself was, ironically, presented to the Castle by William of Orange following the Battle of the Boyne – a notable defeat for the native Irish.

St Patrick’s Hall is notable for its wonderful ceiling paintings by Italian artist Vincenzo Valdré, depicting the relationship between England and Ireland.

The Bermingham Tower, now decorated in Georgian style, is one of the few parts of the Castle which survived the fire and dates to the 14th Century. It was once used as a prison and was the scene of a famous jailbreak on Christmas Eve 1591 when rebel Irish Cheiftains Red Hugh O’Donnell and Art O’Neill escaped from it while awaiting execution. 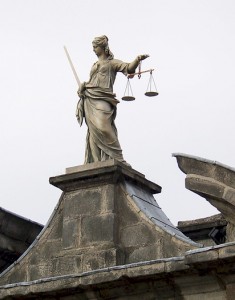 While passing through the Upper Yard, look out for the statute of the Figure of Justice.

Presiding over the Cork St entrance to the Castle, she stands without her traditional blindfold and with her back firmly turned on the city – an irony which was not lost on its inhabitants in the past.

Probably the most interesting part of the tour visits the Undercroft, where there are still remains visible of the original Viking fort and of the Medieval castle walls.

The remnants of the River Poddle, on whose banks the original fort was built, are here too, though it is now little more than a trickle. 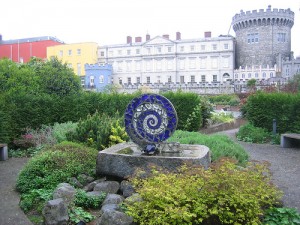 At the back of the castle this garden, laid out in a circle with paths forming a celtic design through the grass, takes it’s name from the Dubh Linn [say Duv lin] or Black Pool which in turn gave the city it’s name.

The pool is long gone, but the gardens are a restful oasis in the city centre and there are some interesting pieces of scultpture in it.

Sadly the garden is now overlooked and overshadowed by a huge and quite ugly office block built behind the castle. Planning at its worst in a city in danger of losing its heritage in the rush to create ever more office space.

Much of the Castle to-day is used to provide office space for the Revenue Commissioners (the tax authority) and it also houses the city headquarters of the police force, the Garda Siochana and the old Records tower houses a museum of Garda History.

Many of the Castle’s rooms can be rented for private events and the upper courtyard is occasionally used as a venue for open-air music concerts.

It has been much in the news in recent years as the venue for a series of government established tribunals which investigated instances of corruption and institutional wrong doing in 1970’s and 1980’s Ireland, leading to regular items on the national news starting with words like: “To-day in Dublin Castle it was revealed…..”

Guided tours are available from 10am to 4.45pm on weekdays and from 2pm to 4.45pm at weekends. The Castle is open all year round.

There is a gift shop and a bistro/cafe available, with another cafe in the adjoining Chester Beatty Library.