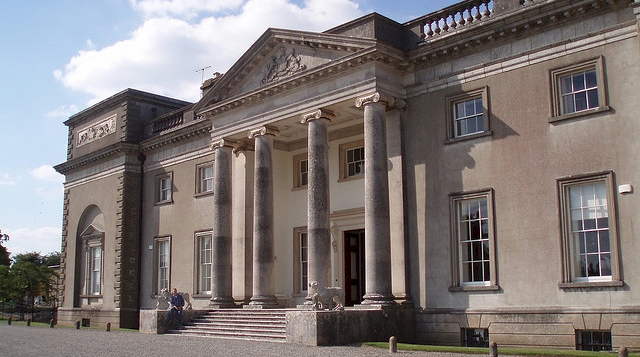 The building of Emo Court was begun by the First Earl of Portarlington in 1790 and it is the only private house designed by James Gandon, the architect who designed the Custom House in Dublin.

It is a huge neo-classical mansion, formal and symetrical in its design and with beautifully proportioned rooms inside. 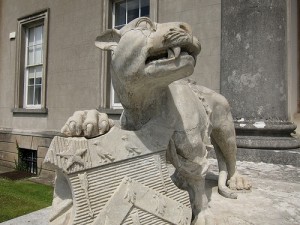 Emo Court has had a rather chequered history.  It took some 70 years to build and was finally completed by the third Earl in 1860. Gandon probably never saw much more that foundations and a few walls as he had been dead for 50 years by the time it was finished.

The Portalington family went to England at the outbreak of the first world war, leaving the house unoccupied. They were never to return and their estate – which covered more than 20 square miles – was acquired by the fledgling Irish state in 1920 to be divided up among local farmers.

The house remained empty until 1930 when it, and the lands immediately surrounding it, were bought by Jesuit priests. They ran a school and also a very successful farm, but were not particularly interested in architecture. The house was altered to suit its purpose as a school, with little regard for preservation of its original features.

Major Cholmeley Harrison and the saving of Emo

The saviour of Emo Court was certainly Major Cholmeley-Harrison, a London stockbroker, who bought the house from the Jesuits in 1967.

He set about a restoration project, employing a leading expert in Georgian Architecture to oversee the project and spending considerable sums to return it to its former glory. Having completed the house, he then began work on the gardens.

He opened the gardens to the public shortly after their reconstruction began, and lived in the house which remained private.  In 1994 he made a gift of the house to the Irish state, on condition that he could remain in residence for the remainder of his life. He died at the age of 99 in 2008.

Many houses of this type were abandoned at the beginning of the 20th century. Only a few recovered, some are completely gone today, the shells of more are all that remain. Almost everything you see when you visit, indeed the very existence of this wonderful house,  is down to the efforts of this man.

The house and gardens are now cared for by the Office of Public Works. 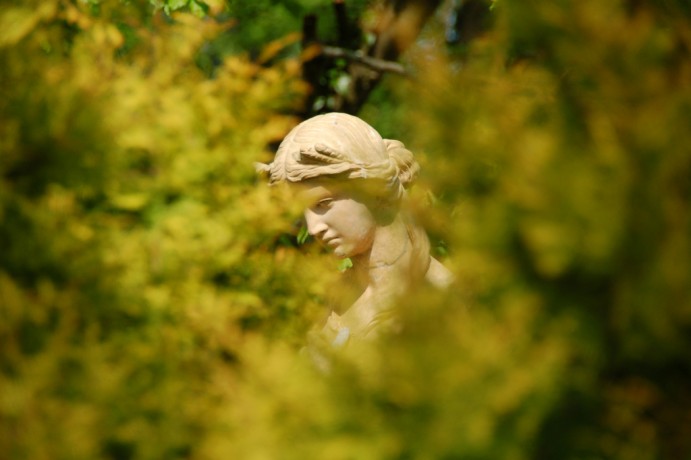 The gardens at Emo are magnificent and they too have been brought back to the splendour of their past, with formal areas, woodland walks, abundant statuary and a lake. 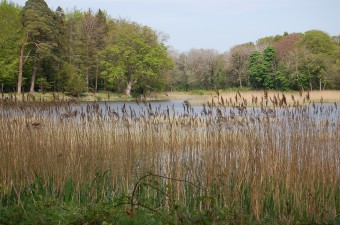 They are divided into two main areas. The Clucker contains some fine and rare specimen trees and a vast range of azaleas and rhododendrons and other shrubs. This part of the garden is at its magnificent best in late Spring.

The Grapery is an arboretum though which wind a series of pathway, each opening to vistas across the surrounding Slieve Bloom mountains or towards the house.

This is a marvellous place to visit in Autumn especially when it is a blaze of dramatic colours. There are loads of wide open spaces here and it’s a terrific place to let kids run wild and let off some steam!

The gardens and woods around Emo are a good place for birdwatching, and you are likely to see Buzzards and Little Egrets as well as many small birds.

The gardens are open all year round during daylight hours. The house is open from 10.30am to 4.30pm from June to September and is only accessible by guided tour.