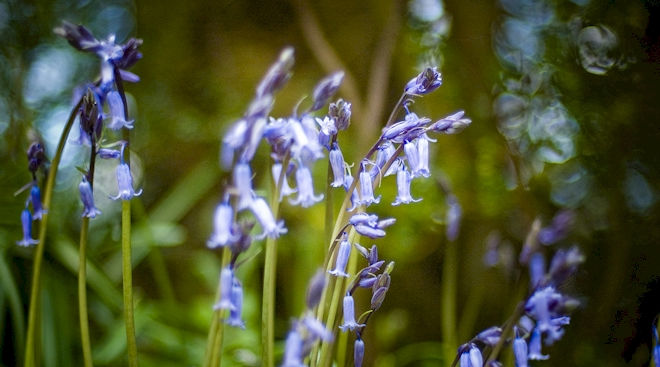 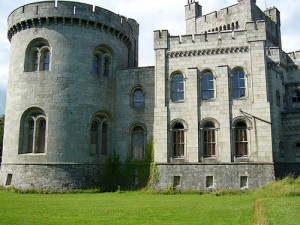 This is one of the largest castles ever built in Ireland. At first glance it looks like a Norman castle but actually dates to the first half of the 19th century, when it was built in the then fashionable Norman revival style by the 2nd Earl of Gosford.

It must have been a splendid place in its prime, built at a cost of  £80,000, with 150 rooms and an interior replete with marble and decorative plasterwork.

It seems never to have been a happy home though. The 2nd Earl’s marriage broke up before it was complete and although construction was largely financed by his wife’s wealthy family she never lived in it. The family had a tendency to live beyond their meagre means and their finances were destroyed by the cost of building the castle.

The 4th Earl was a profligate gambler and a member of the inner circle of the Prince of Wales, a lifestyle he could ill afford. He sold off much of the Castle’s contents to pay his debts. In 1921 the family sold the remaining contents and moved out, never to return.

The castle was the property of the state until 2006 when it was sold to a private developer (for the paltry sum of £1000) who has very beautifully converted it into apartments, keeping as many of the interior features as possible and making almost no changes to exterior.

This is a good thing, it was about to die from neglect and really needs to be lived in to survive. You can still buy an apartment there if you wish!

Interestingly, the spokesman for the developers at the time of the sale was a man called Arthur Acheson. The family name of the original owners of Gosford was …. Acheson. So maybe the family are, in a way, coming home. 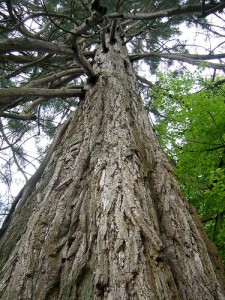 The forest at Gosford is large and more than 200 years old and is a very quiet and peaceful place to walk and never crowded.

There are 4 signposted walks of various lengths through the woods and around the grounds and many wonderful specimen tree including Giant Sequoia.

Two large ornamental ponds to either side of the archway that once was the main entrance to the estate actually had a very practical purpose.

Water enters the ponds by means of an underground mill race and once powered a waterwheel which supplied electricity to the farmyard. Water flows back to the river via an ornamental bridge, which you will also pass on your walk.

Dean Swift, author of “Gulliver’s Travels” was a regular guest at Gosford and wrote many poems in which he mentions the area. He would have stayed in the house which pre-dated the castle, and often stayed for months at a time.

Apparently he composed many of his poems while sitting on a chair in the wood, and certainly he wrote several about Gosford and the Achesons – though it has to be said poetry was not his strong suit. The ‘chair’ on which he sat is a cut made into a bank of earth and surrounded by a yew tree.

He is remembered today in the Dean Swift restaurant and centre at Gosford.

The castle is sadly now in very poor condition, but it is at the heart of a lovely park, which is well worth visiting. Several walking trails take you past though park, woodlands and gardens.

There is a very well kept arboretum and the many animals in the park include a herd of red deer, long horn cattle, rare breeds of sheep and poultry, peacocks and wonderfully huge and gentle draught horses.

There is a picnic area and a campsite, and for those who would like a night in the open air it is a very fine place to pitch a tent.

Have you something to add about "Gosford Castle & Forest Park"?