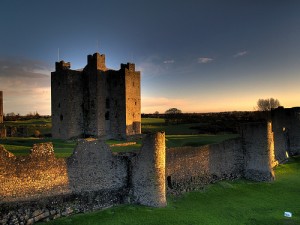 The castle by night, photo by andrewcparnell

If this imposing castle, set in water meadows beside the Boyne river, looks oddly familiar, it is probably because of its appearance in the movie Braveheart, where it was used for the scene of the Scottish assault on York.

It was something of a fitting role for a castle whose purpose from the start was to withstand attack and which saw many hard fought battles during its lifetime.

The first and largest stone castle ever constructed in Ireland, it was originally built by Hugh de Lacy, a Norman lord and follower of Strongbow.

The castle covers over three acres of land which are surrounded by outer curtain walls with defensive towers used to defend a 75ft high central keep. 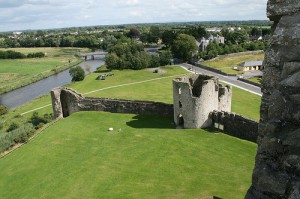 Tower and keep, photo by jamingray

The keep was built as a central square with smaller square blocks abutting from it, one on each side. This, combined with its height, gave a good view and a clear line of fire from the castle to enemies approaching from any direction.

n its prime the keep would have had numerous rooms, including a chapel and a great central hall. Little sign of its glory days remain today however.

Trim Castle was the scene of numerous battles between its completion in 1244 and the end of the Cromwellian occupation in 1680, and was taken and retaken repeatedly by various warring factions, more often acting as garrison than a place of residence. Each successive attack inflicted further damage leaving the castle largely in ruins by the end of the 17th century when it was abandoned.

Despite its condition Trim Castle is a fascinating place which is well worth visiting. Although the interior is almost completely ruined, it is possible to go inside and a walkway has been constructed to allow visitors to explore the building.

Open every day from Easter until the end of October, free entrance with a Heritage Card The guided tour is worth taking (it lasts about 40 minutes) as it puts context on the ruins all around.

Have you something to add about "Trim Castle"?