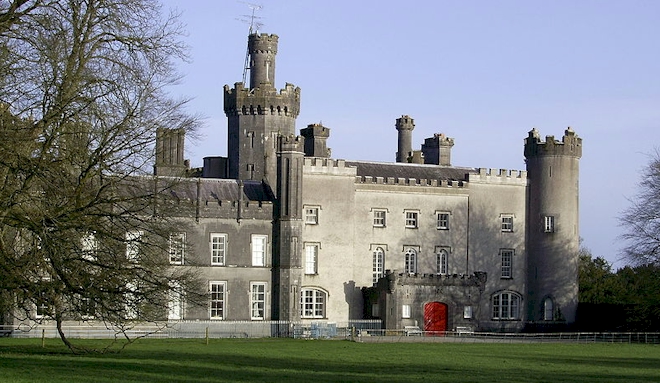 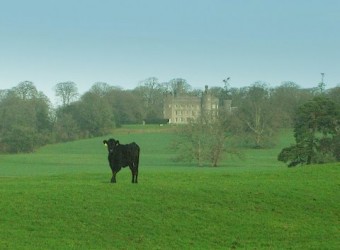 It’s impossible not to be impressed by the elaborate Gothic revival exterior of Tullynally Castle (also known as Packenham Hall), with its castellations, turrets and battlements.

It is in fact a facade, added in 1803, converting what had been a late 17th century house into the castle which the 2nd Earl of Longford must have considered more fitting to his status.

His ancestor built the original house and today Tullynally Castle is the residence of his descendant, Thomas Packenham, the current Earl of Longford, meaning that Tullynally has been home to the same family for more than 350 years. 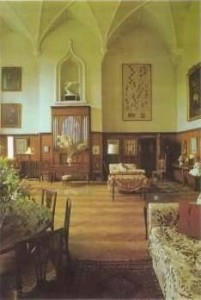 Whatever about the exterior, inside Tullynally Castle never fails to fascinate visitors. Many of the rooms are little changed for a century or more, instead they have adapted gently to the passing years.

The walls of the wood panelled dining room are decorated with wallpaper designed by Pugin for the houses of Parliament and hung with family portraits.

The library, with ceiling high shelving filled with books old and new and the large and impressive front hall are both packed with furniture, pictures and pieces of art as well as the general accumulation of a long occupied family home.

It is very much a home, not just a house, and that adds immeasurably to its character.

Most fascinating are those parts of the house where in days gone by a great retinue of servants would have lived and worked.

The Victorian kitchen with its original shelves, range and cooking implements, the drying room where a vast old boiler once churned out hot water, the laundry with its wringers and vats which are a world removed from today’s sleek washing machines.

Taken together these glimpses into the past build up a vivid picture of two very different sorts of lives being lived out within the same walls. 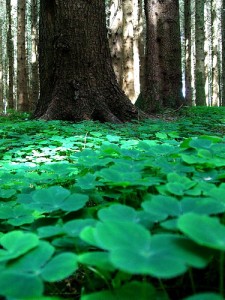 In the woods, by Fiona MacGinty

Looking out from any window at Tullynally opens a vista over the rich and fertile land of Co Westmeath. The gardens make good use of this backdrop and are both extensive and varied.

The Flower Garden is a typical Victorian garden, with old fashioned flowers like jasmine and rambling roses to the fore.

It leads to the enormous Kitchen Garden, part of which is now home to a pair of lovely llamas.

A forest walk, through woods with knarled old trees and a think carpet of plants underfoot, giving it the feel of something from Tolkein, leads to Lake Derravaragh,

Lough Derravaragh & the Legend of the Children of Lir 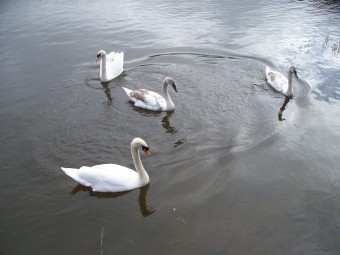 Lir, a great cheiftain, was married to Eve, daughter of Dodb Dearg, King of the Tuatha de Dannann, and they had four children, a daughter Fionnuala and three fine sons Aodh, Fiachra and Conn. When Eve died Lir married her sister Aoife.

Driven wild with jealousy of his obvious love for his children, Aoife tried but failed to have them killed. Instead she called on magic and placed a curse on them, turning them into swans and condemning them to spend 300 years on Lough Darravaragh, 300 on the sea of Moyle and 300 more on the Isle of Glora.

While on the Isle of Glora the swans were were cared for at the Christian settlement of Mochua. He blessed them, breaking the heathen spell and causing them to be transformed, not into children but rather an old woman and three feeble men. Fionnuala put her arms around her brothers and they died intertwined.

Or so the story goes.

Tullynally Castle is open to the public, with guided tours available, from May to August from Thursday – Sunday (plus bank holidays).

Have you something to add about "Tullynally Castle"?