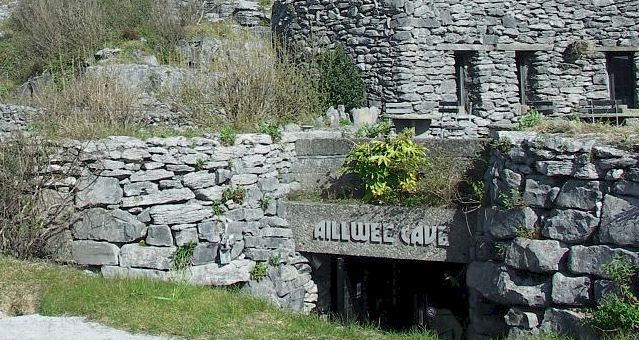 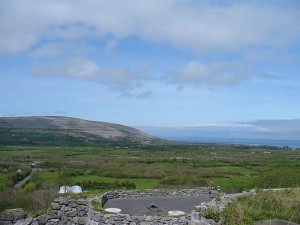 The overwhelming impression left after a visit to Ailwee is of how insignificant a century or even a millennium is in terms of the life of our planet.

Ailwee is part of a cave system created by the action of melt waters from a prehistoric ice age on the limestone below the Burren. The stalagmites and stalactites and columns within the cave have formed over about a million years, with an inch of change taking a century or more to occur.

When you see the intricate and beautiful structure of these formation and think of the time it took for them to form, it is somehow humbling. 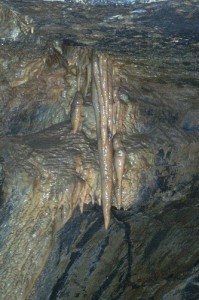 The most interesting feature of the cave is its many stalagmites and stalagtites. These are calcite formations created by the constant slow drip of water through the limestone, each water droplet contributing a few tiny crystals of disolved mineral to the slow growth of the formation.

Some are tiny – just little straws hanging from the ceiling of the cave or small bumbs on the ground, but even these have taken thousands of years to form. The large impressive ones have taken up to 350,000 years to reach their present size.

The formations have been given names due to their shape, so look out for the the “Wasps Nest”, the “Praying Hands” and “the Carrots”.

The caves were once used for hibernation by bears, which have been extinct in Ireland for more than 1000 years. Bones are now all that remain in their sleeping places.

The cave is cut into the side of a mountain and the entrance is high, with terrific views over the Burren and beyond to Galway Bay. The building which houses the visitor centre, and the car park which surrounds it, were very well and sensitively constructed so that as you approach it looks like there is nothing there until the last moment.

There are very nice walks in the area around the cave, with spectacular views. Just below the cave on the exit road is a great farm shop which is well worth stopping at. It stocks excellent local cheeses and preserves and a range of other yummies – a perfect place to buy the makings of a splendid picnic. 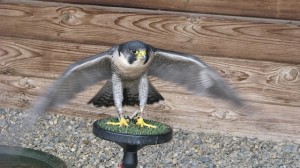 In 2008 this centre, which has the largest and most diverse collection of birds of prey in Ireland, opened next to the cave. Flying displays featuring falcons, hawks, owls, eagles and vultures take place at least twice daily and it’s worth timing your visit to coincide with one of these.

The centre is involved in conservation efforts and in release programmes, particularly for the Red Kite and White Tailed Sea Eagle. There is loads of information about these birds and the efforts to secure their population in Ireland.

Those with a particular interest in birds of prey will want to do a Hawk Walk, where you are taught how to handle a hawk and then set of for a walk though the woods to practice handling your bird.

The caves are open all year round. In December there is no public access in the afternoon as Santa is in attendance!

The tour of the cave takes about 45 mins and is fully guided. The temperature inside is a constant 10°C (50°F), which feels a little chilly in Summer but quite warm in Winter. The distance travelled is just under a mile. The route is paved and while there are some low and narrow parts and a few steepish climbs it is an easy tour for most people. It is not however accessible to those with significant mobility problems.