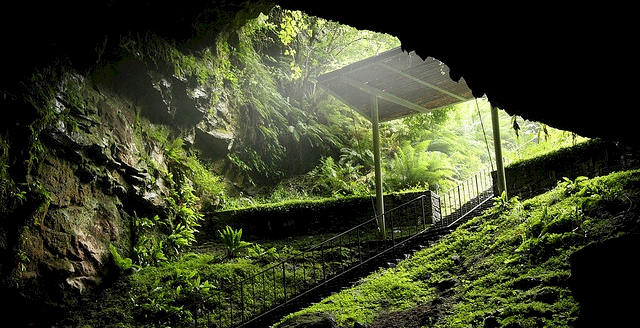 While many cave systems open to visitors in Ireland were discovered relatively recently, this one has been known about since at least the 9th century, and its history is as interesting as its geology.

The first mention of caves at Dunmore is in the Irish Triads, a collection of triads on topics as diverse as nature, geography, law, custom and behaviour which were written in the 9th century. The caves as known then as ‘Dearc Fearna’ or the ‘Cave of the Alders’

A slightly later historical document, the Annals of the Four Masters, tells of a Viking massacre at the cave in the year 928 A.D, a story which has been backed up by Archaeological finds that confirm Viking activity in the cave. Among the items found were silver coins, ingots and buttons woven from fine silver dating to approximately to 970 AD. Historians believe these treasures may have been hidden in the cave and never retrieved – perhaps because their owner died in battle.

The annals tell of a terrible massacre which took place here, with 1000 people killed by attacking Vikings. Over the years there have been numerous finds of human bones, which together with finding of the Viking artifacts, seem to bear out that terrible tale. In all bones have been identified as coming from nineteen female adults and twenty five children, the assumption being that the women and children were hiding out in the caves while the men were away at war.

A particularly poignant discovery was that of an almost complete skeleton of a pre-term infant, which somehow serves to make all the more vivid the tragedy that took place here over 1000 years ago. 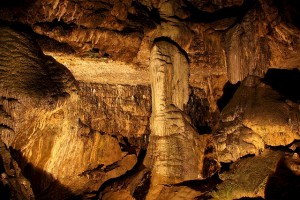 The Market Cross by Mark Heard

The 12m wide and 6m high entrance to the cave is very impressive – a huge opening at the bottom of a steep 20m slope. It’s easy to see why it was referred to in the past as resembling “the mouth of a huge beast“.

As you go towards the entrance it is interesting to note the changing vegetation, from the normal grasses and plants of the area at the top of the slope, to ferns as there is less light and then finally liverworts and green algae on the rocks around the entrance. Inside there is no plant life at all.

Dunmore boasts some of the largest and most impressive calcite formations in Ireland. The largest of these is known as the Market Cross, a name which in recent years was adopted by a shopping centre in nearby Kilkenny

The cave was once home to a large bat colony, and there are still bats there in some of the darker and deeper parts of the cave, though considerably fewer than in the past.

The cave is open year round, from 9.30am – 6.30pm every day from June to September, with earlier closing in other months.

The cave is reached via a long and pretty steep flight of steps, which is fine going down but quite a climb coming out, so a reasonable level of fitness (or at least an absence of extreme unfitness!) is needed. There is no accessibility for wheelchairs or for children’s buggies.

There is a small but informative visitor centre, and a tearoom which serves delicious cupcakes is open during the summer months.

Have you something to add about "Dunmore Cave"?