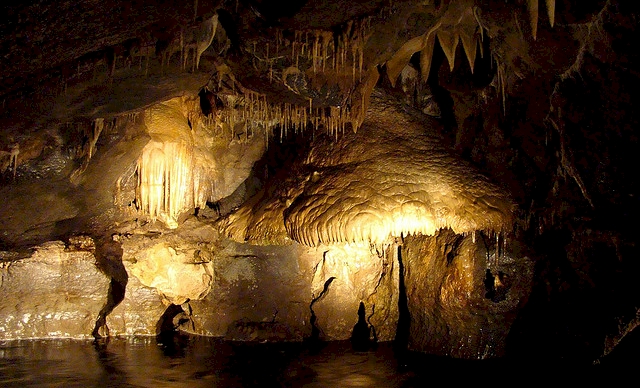 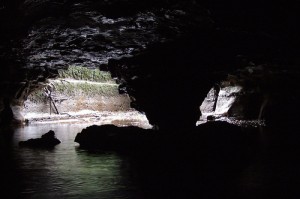 At the entrance, by padraic woods

The caves at Marble Arch are unlike other Irish caves by virtue of their sheer scale – an underground river, the Cladagh, runs though caverns of breathtaking splendour, down narrow winding passages and past a beautiful waterfall.

It’s like entering some sort of subterranean alternative world, and you half expect to find hobbit-like creatures living down there!

Featured image: Inside the caves by Shadowgate

The caves have been open to the public since 1985, but were first discovered in 1895 by a pioneering figure in the history of cave exploration, Frenchman Édouard-Alfred Martel.

For many decades only those skilled in caving were privy to their beauty, but now they have been carefully developed to allow ordinary mortals in, providing safe ways to get around without compromising the delicate structure and environment inside. 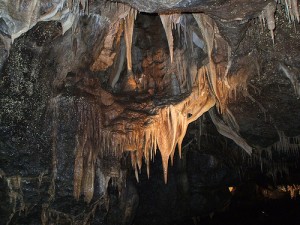 Inside the caves, by andrewmuir.net

The caves are accessible only by organised tours, which leave from the on-site visitor centre. These take place partly on foot and partly by boat along the Cladagh River and can be done by anyone of moderate fitness.

The jouney starts when visitors board a boat to float though the cave entrance into the underground, to the point where three smaller rivers join to form the River Cladagh.

From there visitors go by foot into the fabulous Grand Gallery, with its glistening stalactites and shining creamy calcite walls.

This was as far as most early visitors could get, but an artificial passage has now been opened up to allow access to the equally magnificent New Gallery.  Then it’s back on a boat for the winding journey along narrower passages on the Owenbean River.

The whole trip takes about 75 minutes and passes in a flash. It really is quite beautiful down there and the large galleries especially have many wonderful opportunities for photographers, so make sure to bring a camera.

Even if the weather is sunny and hot outside, wear a warm sweater or jacket into the caves. The temperature underground is a year round constant of about 10° C and it can feel very chilly indeed. 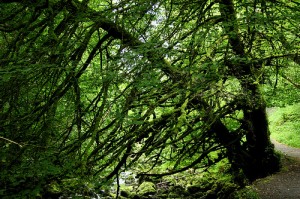 The caves and their rivers are all under the Cuilcagh Mountain, a very scenic area which since 2004, along with the caves, has been a designated European Geopark, in recognition of the importance of its environment and geology.

The mountain has a distinctive table-top profile which is a dominant feature of the landscape in Co Fermanagh, and indeed in bordering Co Caven – the mountain is half in Northern Ireland, half in Ireland, with the border running along its ridge.

The top of the mountain ; is composed of gritstone, which as you go downwards changes to sandstone and shale. Underneath, the caves are limestone karst. ; This unusual geology has resulted in some very dramatic scenery, with soaring cliffs and steep slopes which provide a challenge for the climbers and walkers with whom the area is very popular.

The middle slopes has one of the best areas of active blanket bog left in Europe. Blanket bog is fast disappearing worldwide, and active efforts to conserve this important heritage are ongoing.

The unique habitat of the bog is home to many rare species of plants and is an important breeding site for Golden Plover and the Peregrine Falcon. There is an excellent and well worth seeing exhibition in the visitor centre about bogs and their importance.

The area is also a fascinating one for those interested in fossils. Among the most beautiful are goniatites, fossilised early relatives of squid and octopuses whose beautiful coiled shells have been preserved over the millenia in the rocks of the area. ;

The caves are open from mid-March to September, with organised tours running throughout the day from 10 am to about 4.30pm.

The caves are an extremely popular attractions and can get very busy in high season, with long waits to join the next available tour. However there is a way around this, just call ahead earlier in the day, or on the previous day – to 028 6634 8855 from Northern Ireland or 048 6634 8855 from the republic – and you can pre-book a tour departure time. Doing this is highly recommended.

Once home to the world's largest telescope, Birr Castle has a fascinating …

Have you something to add about "Marble Arch Caves"?