The scene of an apparition of the Virgin Mary, St Joseph and St John the Evangelist on August 21st 1879, Knock has grown a considerable industry around the gable wall where the event occurred.

The focus of most activity is now a large and impressive basilica which can hold up to 20,000 people.

Pilgrims, some 1.5 million of them annually, include a large number of sick and disabled people, hoping for a miracle and often finding considerable solace from their visit.

In that sense it somewhat resembles Lourdes in France. 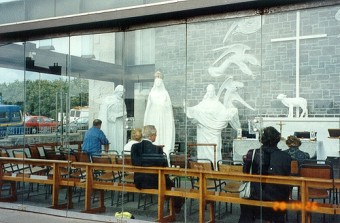 The apparition was witnessed by 14 local people, including the parish priest’s housekeeper. The three figures seen were apparently life-size and witnesses also report seeing an altar with a lamb on it.

The figures did not move, and were initially taken by some witnesses to be statues, placed for some reason outside the church.

“I went in immediately to kiss, as I thought, the feet of the Blessed Virgin; but I felt nothing in the embrace but the wall, and I wondered why I could not feel with my hands the figures which I had so plainly and so distinctly seen“

A commission of enquiry established by the Catholic Church accepted the accounts of the witnesses as reliable and the shrine has canonical sanction.100 years after the original apparition John Paul II visited Knock and celebrated Mass at site, an event attended by more than 450,000 people.

There have been suggestions over the years that the apparition was created using a ‘magic lantern’ to project images onto the gable wall of the church. Proponents of this view cite among other things the fact that witnesses reported that the figures did not move and had a flat two-dimensional character.

This documentary takes a believer’s view of the shrine and the apparition, and tells the story of what is said to have happened.

Miracles have certainly been reported at Knock, not least of them the extraordinary achievement of local parish priest, Monsignor James Horan, who persuaded the government and the EU to fund an international airport close by. Knock International Airport must be one of the most extraordinarily located airports anywhere, in a remote rural location, on a bog and close to the top of a mountain.

Regular flights from the UK and some charter flights land there, and if you have the chance to fly in take it, it will be quite an experience.

The Museum of Country Life, just outside Castlebar houses the folklife collection of the National Museum and is very well worth visiting. Foxford is famous for its woollen mills, which are now open to the public with a very interesting display of old weaving methods and the unusual history of the mill.

The drive from Foxford by Lough Culin and Lough Conn, both noted trout and salmon fishing lakes, to Pontoon and around the Pontoon area is very beautiful and generally deserted.

Pilgrims continue to flock to the shrine to-day, along with large numbers of tourists. It is located close to Castlebar in Co Mayo and is well signposted.

The number of stalls and stores selling unbelievably tacky souvenirs and religious bric-a-brac rather takes from the sanctity of the place and it is very different from the more austere places of pilgrimage elsewhere in Ireland.

Have you something to add about "Knock Shrine"?