St Canice’s Cathedral was built during the early 13th century on the site of an earlier monastic settlement which gave the city of Kilkenny its name, Chill Choinneach, meaning the Church of Canice.

After the time of the original settlement a small church stood here, but this was replaced completely when building of the cathedral commenced.

Although the cathedral was severely damaged by Cromwell’s army in 1651 it was later restored on more that one occasion, but always in a manner that both respected and preserved the best of its original features, making it one of the great treasures of Irish medieval architecture.

Cathedral at sunset by stephenhanafin 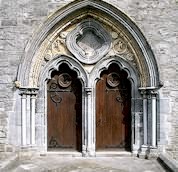 The building is relatively plain in design, built in a cruciform shape around a low central tower over the altar. In many ways the exterior hides the real treasure, which is the rich store of monuments, effigies, statues and carvings inside.

The west doorway, probably the finest Gothic doorway still standing in Ireland, is surrounded by elaborate carvings which are the work of a gifted but unknown mason known only as the Gowran Master, due to his extensive work at St Mary’s Church in nearby Gowran.

Among the many effigies in the cathedral the best known are those of Margaret and Piers Butler in the South Transept, which date from the mid 1500s and are so lifelike that you almost expect them to wake up and speak to you! 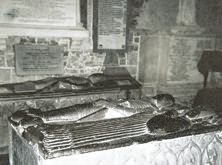 Many members of the Butlers and other notable families have elaborate monuments or tombs within the cathedral.

The tomb of a member of the O’Tunney family has a side slab with carvings of the apostles; in the south nave Richard Butler’s death in 1571 is marked with an effigy in full armour carved in white marble, while a plainer tombstone with a touching epitaph marks the final resting place of Mary Stoughton, who died in childbirth in 1691.

The floor has some interesting carved slabs created in the 17th century to depict the work of various craftsmen, a shoemaker, a carpenter and a weaver among others, which incorporate the tools they would have used in their work.

During the 20th century two notable stained glass windows were installed in the south wall of the nave. 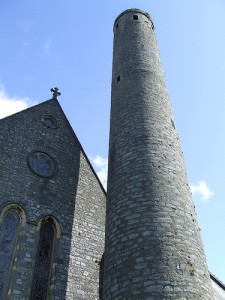 The 31m high round tower, one of very few which can be climbed by visitors, is the only remaining part of the original monastery that pre-dated the Cathedral.

The view from the top is spectacular, over the city and out into the surrounding countryside, but the climb is quite arduous. Narrow, steep and uneven stone steps wind their way to the top and it is really only a task for the fit and able bodied to make the ascent.

I did it a couple of times – once to release a swift who had become marooned at ground level and unable to launch back into flight. Thankfully, given that I was watched by a concerned crowd at the tower base, he flew away safely, I’d had visions of him plummeting down like a stone on their heads.

The Cathedral is open to visitors seven days a week except during services. Visitors may attend services, though there are no tours while they are in progress. There is an excellent choir and organist resident in the Cathedral, well worth hearing for anyone with an interest in church music.

The building has excellent acoustics and during the annual Kilkenny Arts Week is a venue for classical music concerts and recitals.

Have you something to add about "St Canice’s Cathedral"?