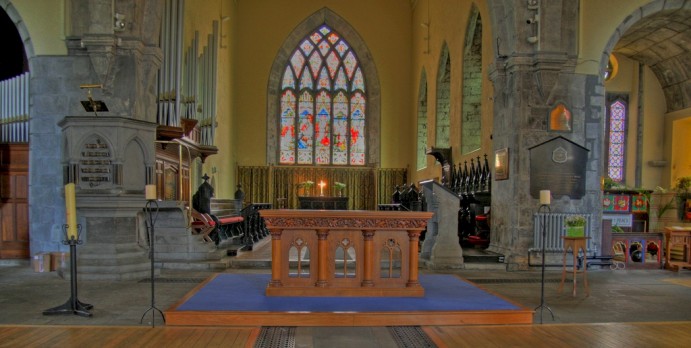 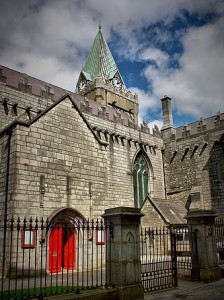 St Nicholas’ was established around 1320 and is named for St Nicholas of Myra, the patron Saint of seafarers.

Local legend has it that Chistopher Columbus prayed here before he set out on his voyage to the new world.

Over the centuries it has alternated between being a Protestant and a Catholic Church but is nowadays part of the Protestant Church of Ireland.

In spite of this it retains the ‘collegiate’ title (a designation  similar to a cathedral but without a bishop) which was given to it by Pope Innocent the 8th in 1485 and is officially known as The Collegiate Church of St. Nicholas of Myra.

In 2005 while the nearby Catholic Church of St Augustine was undergoing renovation, St Nicolas was made available for the celebration of Mass for the displaced parishioners, a notable ecumenical gesture.

This was the first time that Catholic services had been held in the church for 200 years.

St Nicholas has always had a central role in Galway life. For many years it was the location for the election of the Mayor, and today it is an occasional venue for classical and church music concerts.

The bustling Galway Market, which sells food, craft, clothing and a lot more, is held just outside the Church every Saturday morning. 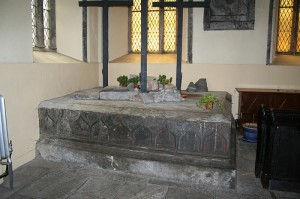 Inside St Nicholas of Myra Church

Although there have been some changes to adapt to the times, such as the addition of the north and south aisles  in the 1600s, much of the cathedral is as it was originally built.

Inside there is a very ornate 16th century baptismal font and several decorated tombs, including some of members of the Lynch family from the nearby Castle.

There is also a mass grave which contains several hundred skeletons.

Also look out for a 12th-century tomb of a crusader has a rare Norman inscription, a stone lectern with barley-sugar twist columns dating form the 15th century and a 16th century carved baptismal font.

A column in the south-east nave has particularly ornate decoration and is believed to be an ‘apprentice’s piece’, a sort of medieval portfolio, created to show the skill of the maker.