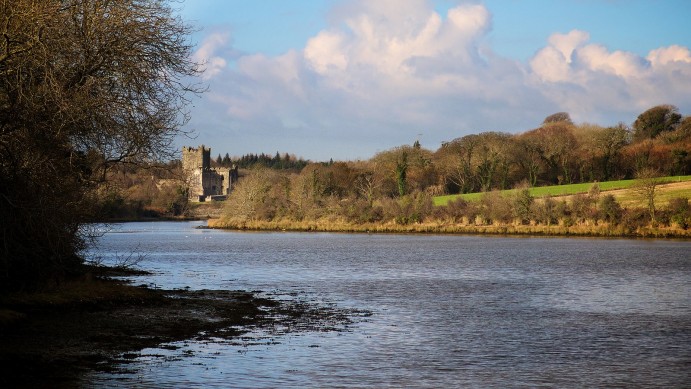 Not anything like as well known as its namesake in Wales, which inspired the famous Wordsworth poem, this ruined abbey in Wexford with a somewhat unusual history is nonetheless well worth visiting.

The Foundation of Tintern Abbey

In 1200 William Marshall, Earl of Pembroke in Wales was made Earl of Leinster and had set out to survey his new lands in Ireland when his ship was caught in a particularly savage sea storm. Praying for a safe passage he declared he would build an abbey at whatever place the ship found dry land.

True to his word, having landed in Wexford, he gave money and 9000 acres of land for the founding of Tintern Abbey in Saltmills, and sent Cistercian monks from the other Tintern, which he had also founded, to live there. The abbey in Wales became known as ‘Tintern Major’, and its daughter house in Ireland as ‘Tintern of the Vow’. 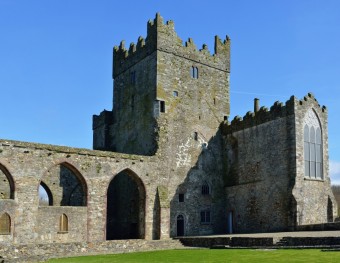 The abbey was constructed using the same plan as all Cistercian monasteries of the time, similar to that at Jerpoint Abbey – built beside a river, with a cross-shaped church including small chapels for private prayer in the transepts that formed the arms and surrounded by a cloister and chapter house, plus kitchens, refectories and dormitories.

Over the following 300 year or so the abbey grew to be one of the richest and most powerful in Ireland, with the monks efficiently farming its huge acreage and continuing to enjoy the patronage of wealthy Norman families.

In the late 1530s Henry VIII set out to disband Catholic monasteries, and most of those in Ireland were abandoned at this time. For the majority this was the end of their occupation, they fell into ruin and their lands were distributed among those favoured by the King. 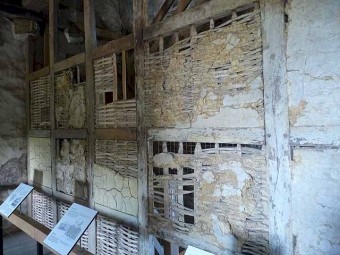 Tintern had a somewhat different fate. Renovations of abandoned churches to make family homes are now the stuff of TV shows, and this was what happened when the abbey and some of its land was granted to Anthony Colclough by Henry’s daughter, Queen Elizabeth I in 1578.

Most of the surrounding buildings were torn down and the tower was altered for use as dwelling, with additional floors constructed as well as the stairs required to reach them, room divisions created and oak paneling and other desirable interior decor features of the time added.

Succeeding generations of the Colclough family continued to live there until Lucy Marie Biddulph Colclough handed it to the state in 1956. The 1911 census  shows 5 residents, two of them servants, living in Tintern Abbey. 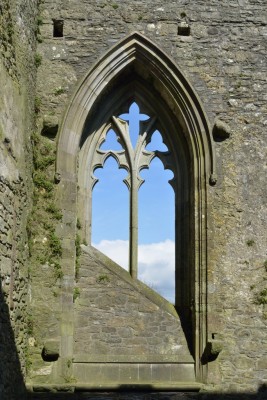 The abbey is now mostly ruined, but the remaining buildings have been carefully and well preserved.  Look out for the 18 grotesque heads carved in the walls of the chancel and the carved stones at the lower level of the tower stairs and around the windows.

During the renovations walls in the second floor of the tower were exposed to varying degrees in a series of panels showing how 16th century builders used wattle and daub to construct them.

Look up, both inside and outside, and see where buildings which no longer once joined the tower and remnants of the previous lives lived here, such as a fireplace in rather sad isolation high up on the tower interior.

Outside there are some lovely woodland walks and it’s worth taking a stroll down to the unusual castellated bridge which crosses the river.

Nearby, the old Colclough Walled Garden is an ongoing restoration of a typical (if unusually large) Georgian walled garden built by the Colcloughs in the early 19th century and more than worth an extra hour.

The abbey is open all year round. Entrance is €4 per adult or free with a Heritage Card. There is good car parking, toilets are available.

Entrance the Colclough Walled Garden is separate and not covered by the Heritage Card.

Not to long ago visitors avoided Belfast, but times have changed and it is now a …

This is a full day tour which will last into the evening, taking in all of the …

Have you something to add about "Tintern Abbey"?