Home » What to See » Forts and Jails » Duncannon Fort 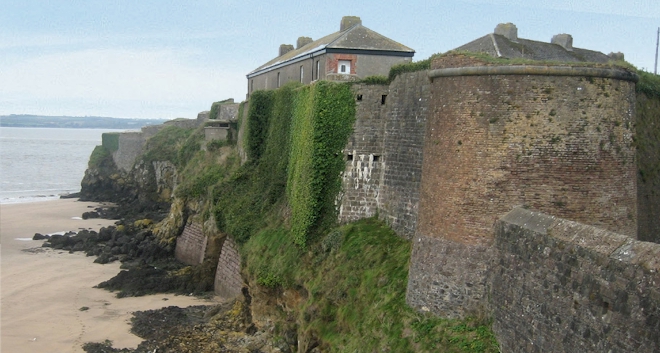 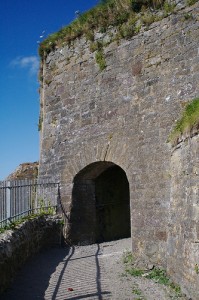 Duncannon Fort as it is to-day mostly dates from 1588, when it was constructed on a promontory near the strategically important port of Waterford as a defense against an expected attack from the Spanish Armada.

Prior to that there was a 12th century Norman fort at the same site and possibly an even older earthen fort.

The lighthouse at the fort dates from 1774 and is still in active use.

The fort is a classic star-shaped fort and its prominent location gave it continuing importance over the centuries. It was a notably strong defense. It took a six week siege in 1645 before it fell to Confederate Catholic forces and in 1649 Cromwell tried but failed to take it, forcing him to use a different and more circuitous route via New Ross to land his artillery into Waterford.

The fort remained an important British garrison until 1919 when it was handed over to the fledgling Irish Free State, only to be destroyed three years later during the civil war. It lay abandoned until the start of World War II at which time fears that Hitler might attempt to invade Ireland led to it being rebuilt and occupied by the Irish Army until the war was over.

It was occasionally used by the army subsequently as the site for summer camps until in 1993 when it was given to Wexford County Council. By that time it was in very poor shape and since then a slow but careful restoration project has been ongoing.

The fort now houses a very good maritime museum, mainly concentrating on the story of the very dangerous waters off the South East coast of Ireland. The 30 ft high dry moat which surrounds the fort has been restored, the central parade ground and some of the buildings are also now in good condition.

An interesting feature is the ‘Croppy Boy cell’. This is supposedly where the hero of the well known Irish rebel ballad, the Croppy Boy was held. The ballad tells the story of an unknown rebel who was betrayed to the English by a member of his own family and was executed. The final verse of the song goes:

‘Twas in Duncannon this young man died
And in Duncannon his body lies
So, all good people who do pass by
Just drop a tear for the croppy boy

The fort is open to visitors from April to November. In addition to the museum the building now houses an art centre, a craft shop and a small cafe.

The village of Duncannon is a pretty one and worth taking a stroll through. Look out for a 17th century wreck in the waters close to the harbour walls, you may be able to see part of it depending on tidal conditions. It is believed that it could be the flagship of Cromwell’s navy and divers can see a line of cannons although most of the ship is sunk into a sandbar.

Located on the shore of the remote and lovely Killary Fjord, this busy and …