Home » What to See » Forts and Jails » Rock of Dunamase 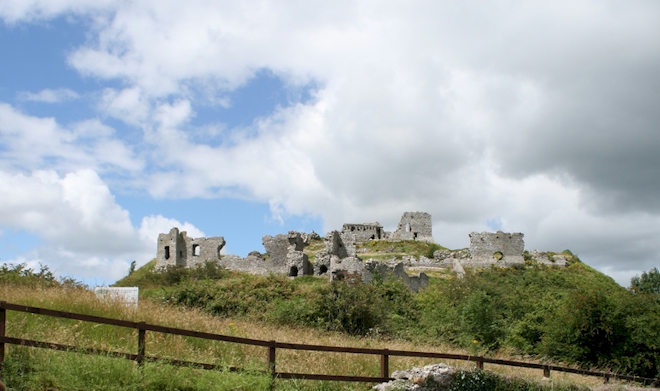 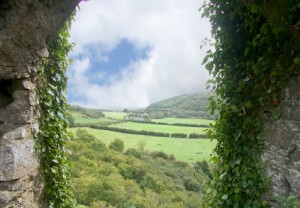 View from Dunamase by Wally Hartshorn

Although completely in ruins for several centuries, there is something very alluring and magical about Dunamase Castle. It stands high on a limestone cliff with magnificent views over the surrounding countryside and the Sleive Bloom mountains.

It was more for the defensive advantage this view afforded than for its beauty that this location was chosen for a fort in the 9th century. The name means ‘Fort of Masc’, Masc presumably being an early chieftain in the area.

Both the origins and later history of Dunamase are largely shrouded in mystery, with very patchy records. It is known that Vikings from Dublin attacted a fort here in 845 and killed the abbot of Terryglass.

Nothing remains of the original fort, what we see are the ruins of a Norman castle built in the second half of the 12th century.

It is not clear who built this castle, though Strongbow has been suggested as a strong possibility. It was certainly in the hands of the Dermot McMurrough’s family, 12th century rulers of Leinster,  and Strongbow, through marriage to McMurrough’s daughter, ruled this area.

Stongbow’s daughter married William Marshal, who later became Regent of England in the reign of of Henry III, and from there the castle is believed to have passed to Roger Mortimer, who was executed for treason in 1330. Subsequent to that there is little evidence that Dunamase was ever again occupied, so it has been quietly crumbling for almost 700 years. 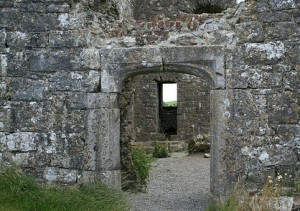 It was a sizable building, with a great hall and large fortifications. There are inner and outer defences, an entrance gate with a tower and a barbican. It is testament to its strength and to those that built it that anything at all remains after so long a time.

During excavations there in the 1990’s a couple of discoveries, while not of huge significance, bring the past to life for me. Archeologists discovered small cat pawprints in the mortar used in the wall of the Great Hall, while the impression of a medieval leather shoe was discovered in the mortar on the parapet. That conjures up for me images of medieval workmen on a break, sharing the crumbs of their lunch with a playful kitten.

The church near the castle is the Holy Trinity Church, which is a Church of Ireland church built in the 1860s and still in use. There are some interesting headstones beside the church for those who enjoy exploring graveyards.

The castle is now national monument and is in state care. While works to secure the ruins have taken place, there are no facilities of any kind at the site, you basically just show up and look around. Accessibility is quite poor for those with mobility problems. Unless you visit at a weekend you’ll probably have the place to yourself, and it is never crowded.

Map and directions for Dunamase Castle

Have you something to add about "Rock of Dunamase"?