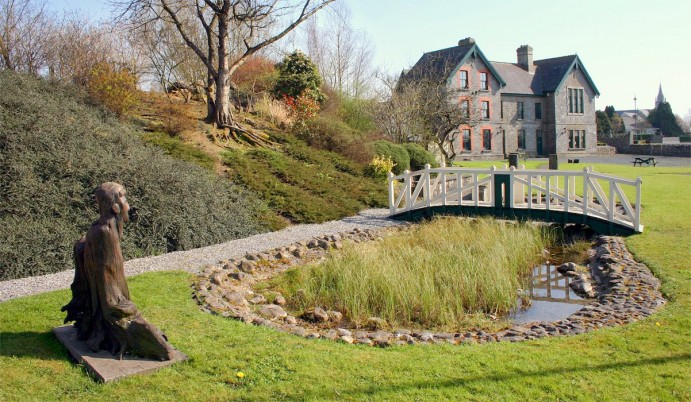 Abbeyleix is a town that moved. Originally it was a settlement that grew up around a Cistercian Abbey starting in the 12th century. However in 1790 the local landowner, the 2nd Viscount de Vesci, decided the town was not suitable for his tenants, and so he commenced the planning and building of an entirely new town. 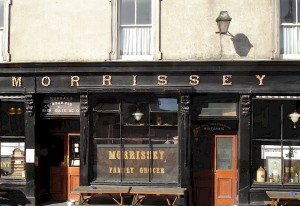 The town you see today is entirely the fruit of that project, and it is one of the best examples of a planned estate town in Ireland.

The de Vesci family still live in nearby Abbeyleix House, a fine building, designed by James Wyatt, with magnificent gardens, though the house is private and the gardens only occasionally opened to visitors.

It’s a pretty village, which was in the past spoiled by the unending traffic that flowed through on the busy main Cork-Dublin road that bisected it. The opening of a motorway which bypasses the town has restored its integrity and made it a much more pleasant place.

Abbeyleix is now an excellent place to get off the motorway for a break on your journey.

What to See in Abbeyleix 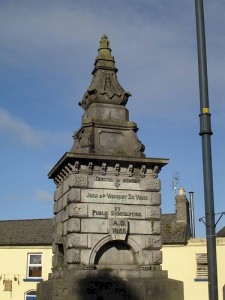 A memorial to the 3rd Viscount de Vesci stand at the entrance to the town from the Dublin side and in the town centre there is a memorial to the 2nd Viscount, which was built by public subscription. Neither is a particular attractive monument, though in earlier times at least the latter one had a practical use as a water trough for horses.

There is a very elaborate bank building along the main street which once also served as home to the bank manager.

Both the Roman Catholic and the Church of Ireland churches are worth a quick look for those interested in church architecture.

Possibly the thing that makes a stop in Abbeyleix most worthwhile is a pub on the main street. This is a true gem, owned by the same family since 1775 and apart from some renovation in Victorian times, little changed either inside or out over the centuries since.

There is no music or gimmicks here, its a place for conversation around the pot bellied stove accompanied by a pint of Guinness or a cup of tea, both brews for which Morrisey’s is renowned.

A cut stone building dating from 1884 which was once a boys school and is now a small museum and heritage centre (Website). Exhibits chart the history of the de Vesci family and tell the story of the town and of how it was planned.

There is also an interesting exhibition about the Abbeyleix Carpet Company, which was established by the de Vescis in 1904 and supplied carpets to high end stores like Harrods in London and Marshall Fields in Chicago as well as to the Titanic.

Places to Visit near Abbeyleix

Anywhere in Laois or in Kildare are easy to visit from Abbeyleix.

There are also a couple of small local museums well worth seeing when you are in the area. I really like these local museums run by local people, the people you meet are invariably friendly, knowledgeable and enthusiastic and many have links in the community going right back to the days their museums illustrate. Visit them whenever you can, you’ll be glad you did.

About 12 miles from Abbeyleix, this museum is run by a voluntary committee of local people and tells the stories of those who ended up in the workhouse during and after the famine. There are also small exhibits of farm, household and industrial tools and equipment. 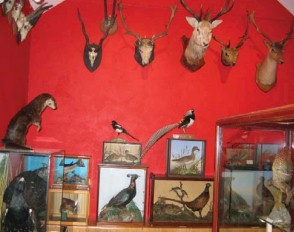 One for enthusiasts only perhaps, this remarkable collection, comprising thousands of objects spanning more than 300 years, was assembled by one man, Walter Phelan, who will probably be on hand to show you around.

There are rods, reels, guns, tackle and tools, ranging from the simple homemade tools used by those who hunted to eat to the beautifully crafted tackle of those who hunted for sport. A remarkable collection of flies, with some dating back to the early 1800s,  includes many made from exotic feathers brought back by sailors from their travels.

One rather horrific exhibit is a ‘man trap’, used to catch poachers or trespassers.

Cities & TownsPlaces to Visit in Ireland LaoisOff the Beaten Track

Have you something to add about "Abbeyleix, Co Laois"?