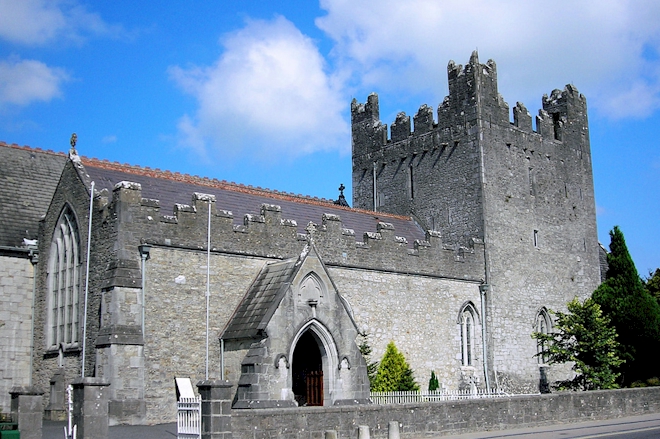 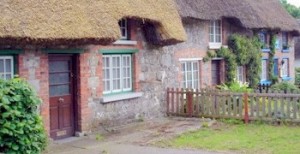 Typically referred to as “the picture postcard village of Adare”, this small town on the road from Limerick to Killarney is invariably crowded with visitors throughout the high season – the row of thatched cottages on the main street is probably one of the most photographed vistas in Ireland.

Intentionally pretty, and very much English rather than Irish looking in character, the town as it is today was essentially created between 1820 and 1840 by the Earl of Dunraven around his home at Adare Manor (C), now an exclusive luxury resort with a golf course where the Irish Open tournament is regularly held. 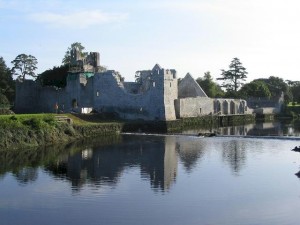 However Adare’s history stratches back much further than this, to the settlements that developed around the Trinitarian Abbey, which was built in 1230 and which is now, much changed and little improved by a 19th century rebuild, a Catholic Church.

On the other hand the Augustinian Priory which was built just a century later in 1325 has changed little since, it is probably the best preserved chruch from that time in the country and still in use as the local Church of Ireland place of worhip.

There is a Heritage Centre in the village, and from there you can join a tour to theDesmond Castle, an impressive Anglo-Norman fortress which was strategically situated on the bank of the river at the entrance to the town. 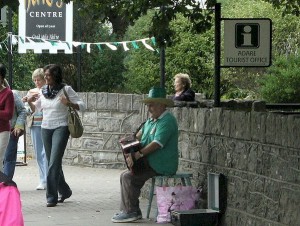 The Dunraven Arms hotel was built as a coaching inn in 1792 and has basically served that function since – though now the coaches are large buses bearing tourists rather than horse drawn affairs.

It is a pretty building, extremely popular for weddings and much photographed.

While it’s worth stopping in Adare I am not sure it’s worth lingering there for too long in high summer when it gets fairly crowded, and there are too many kitschy tourist shops and overpriced restaurants catering to the tour bus trade for my taste.

Have you something to add about "Adare, Co Limerick"?