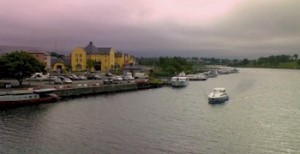 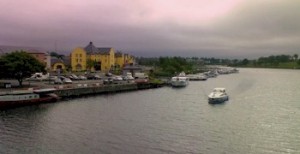 Carrick is a very pretty town in a great location on the River Shannon, close to where it joins the Erne waterway in Northern Ireland.

Its position on the river made in in past times a busy trading port, with barges and cargo boats bringing timber, cement, hardware and, most importantly, Guinness, up the river.

It is the largest town in County Leitrim, Ireland’s least populous county. The surrounding area is also very popular with lovers of fishing, who have long known what too few other tourists do – that this very lovely, peaceful and friendly area is a real gem that relatively few visitors ever discover.

Carrick is home to one of Ireland’s oldest canoe clubs, founded in 1827, and its members can often be seen in action around the area of the bridge.

What to see in and around Carrick-on-Shannon

The Town Clock which stands on a tower dominating the centre of Carrick was built in 1905 by the townspeople in honour of Owen McCann, the first chairman of Leitrim County Council who died in1901.

The nine arch stone bridge, built in 1846, replaced an earlier wooden bridge and is still commonly referred to locally as “the new bridge”.

There are few other places to see, but then the glory of Carrick is the river, and it provides miles of great walks along it banks and of course a huge range of water based activities.

Carrick-on-Shannon in the News

Have you something to add about "Carrick-on-Shannon, Co Leitrim"?