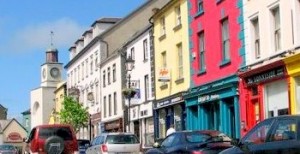 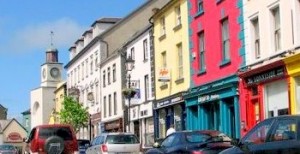 Carrick, as it is known locally, has been established since at least 1247, when a charter entitling him to hold 3 fairs per year was awarded to the local Lord of the Manor.

The tradition of holding a fair – a gathering where horses and cattle are traded – continues to-day.

Its a busy market town with more locally owned shops on its main street than is now usual in Ireland – the relative absence of chain stores is a welcome relief.

What to see and so around Carrick-on-Suir

The major draw for visitors is the Elizabethan Manor House, Ormonde Castle, built around 1560 by “Black Tom” Butler, a cousin of Queen Elizabeth.

A wander though the town is also worthwhile, to see the old town clock and the 7 arched Old Bridge, which dates back to around 1477.

A few miles away on the road to Kilkenny are the Ahenny High Crosses which date from the 8th or 9th Century and are probably the earliest group of such crosses in Ireland. Both stand over 3m high and are richly and intricately carved.

Carrick-on-Suir in the News

Have you something to add about "Carrick-on-Suir, Co Tipperary"?