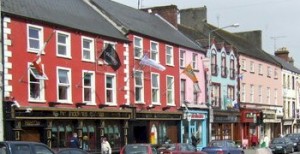 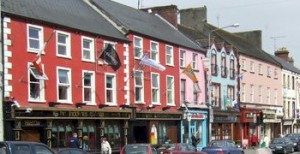 Carrickmacross is a relatively new town in Irish terms – in 1634 there was just a castle (owned by the third Earl of Essex), an inn and a few houses there – and it really became established during the 18th century, growing into a thriving centre of commerce and manufacturing.

Although the principle industries were distilling and the manufacture of tobacco, candles, soap and nails, it is for its distinctive lace that Carrickmacross is best known.

Lace making was originally brought by the wife of a protestant rector but later established mainly by the nuns in the local convent, who still teach it to their pupils today. It is a tradition kept going by a local co-operative.

The surrounding area is rich in lakes, making it something of a mecca for anglers, particularly from mainland Europe.

What to see in and around Carrickmacross

The Carrickmacross Lace Gallery is the centre for lace production in the town and has many old items of lace in its collection. Lace can be purchased and you can also, by prior arrangement, see it made

The St. Louis Convent stands on the site of the original castle, though sadly there is nothing left to see of the castle itself.

Inniskeen, a few miles from the town, has a good round tower and is also home to the Patrick Kavanagh Centre, which in addition to exhibitions about the life and work of the poet has some interesting exhibitions on local history.

There are nice walks through the Dún an Rí Forest Park, a few miles from Carrickmacross on the road to Kingscourt.

Carrickmacross in the News

Have you something to add about "Carrickmacross, Co Monaghan"?