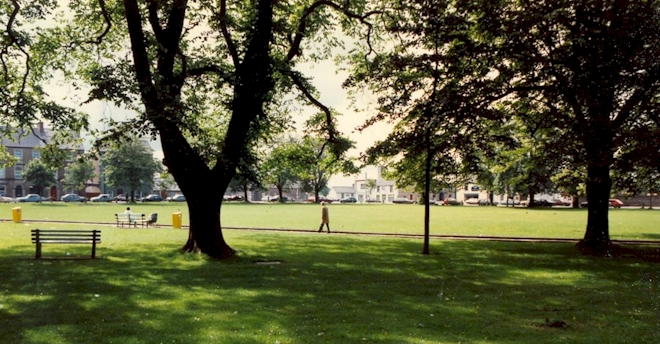 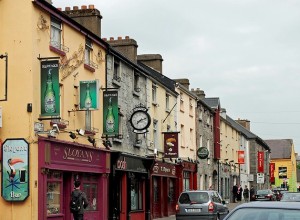 Castlebar, as its Irish name suggests, grew up as a settlement around the de Barry castle which was built in the 12th century, and was later the site of an English garrison and of several famous conflicts between the Irish and those who would rule them.

Castlebar is a well known centre for walking and angling, with many lakes, rivers and hills in the vicinity. It is a good base for exploring Co Mayo, north Galway and south Sligo.

It’s a busy and fast growing place which has good shopping, many of its shops have been here for generations, operated by the same families. Probably Castlebar’s greatest claim to fame at the moment is that it is the home town of Enda Kenny, the Taoiseach (prime minister) of Ireland.

What to see in and around Castlebar

There isn’t an awful lot to see in the town itself, but there is enough to warrant a stroll though the town.

A good way to do this is to follow the Sculpture Trail, a series of bronze, stone, steel and timber sculptures, mostly by Irish artists. You can pick up a guide to the trail at the Tourist Office and it will take you past most of the places worth a look.

At the centre of Castlebar is a town park, The Mall, which was originally Lord Lucan’s cricket green. The most imposing building on the Mall is Christ Church, built in 1739, with the clock tower added when the church was renovated in 1807. For those who like wandering around headstones, the adjoining graveyard is a real pleasure.

The school opposite the church was once Lord Lucan’s home (yes, its that Lord Lucan, or at least his ancestors).

The Linenhall Arts Centre has regular art exhibitions as well as a varied year-round programme of theatre, dance and music, so it’s worth seeing what’s on there if you are staying overnight. The centre is housed in was built in 1790 as a store house for the flax and linen which was once produced in the region. 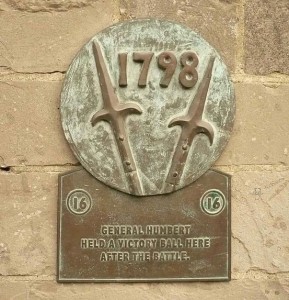 One of the most important events in Castlebar’s history was Battle of Castlebar which took place during the Irish Rebellion of 1798. An attack by more than 6000 English soldiers was beaten off by 2000 strong combined Irish and French army, under the command of General Humbert.

There are a series of plaques commemorating the events of the battle, including this one on the Linenhall.

Just outside the town the Museum of Country Life is at Turlough Park, a very worthwhile visit and with many special events during the summer months.

It’s at the site of a castle built in the 13th century by the De Burgos, the same family whose castle gave Castlebar its name. They were once a very powerful clan around these parts. The house that stands there now was built in 1865 in the Gothic style so loved by fashionable Victorians – it’s certainly very impressive, but wouldn’t be everyone’s dream house!

Things to do and places to see in and around Castlebar.

Have you something to add about "Castlebar, Co Mayo"?