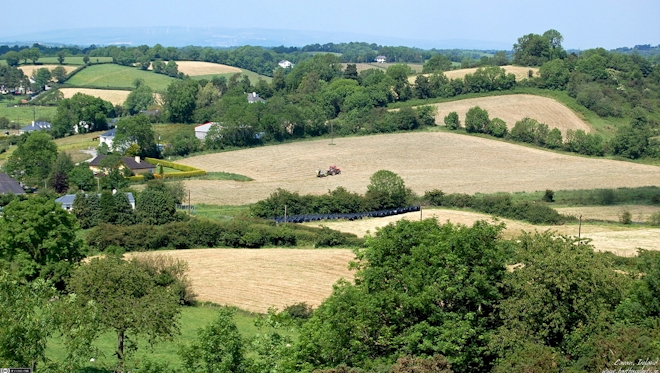 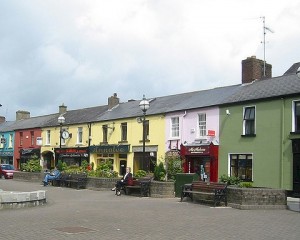 The square, Cavan by Sarah Jane

Cavan town was established when the O’Reilly family built a castle and friary there in the late 13th century – and they never left, almost every second person in Cavan is a Reilly or an O’Reilly even today.

The privileged and comfortable existence they had is said to have led to the term “having the life of Reilly”.

Much of the town’s appearance today is due to a local landlord family, the Farnhams and in particular to the 8th Earl of Farnham, whose statue stands in the town. In the mid 19th century he built a new street, still called Farnham St, lined by terraces of Georgian houses and public buildings such as the courthouse. The old Farnham Demesne is now a hotel.

16 Farnham St was once home to Percy French, songwriter and composer of such classics as “The Mountains of Mourne” and “Are ya right there Michael”.

The town is at the centre of Drumlin Country – an area of low rolling hills interspersed with innumerable lakes and waterways. The narrow quiet roads that wind through the drumlins are perfect for walkers and cyclists and of course all that water – Cavan has more inland water than any other place in Ireland – makes it a mecca for lovers of fishing.

This is a part of Ireland overlooked by many visitors, but its quiet charm means that those who take the time to discover it tend to return again and again.

In Ireland the people of Cavan have a perhaps unfair reputation for meanness, though locally they’d prefer to think of it as being canny about money. Whatever about money there is great generosity in the welcome visitors to Cavan receive.

What to see in and around Cavan Town 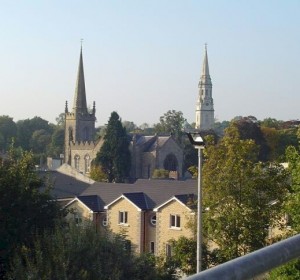 The Cavan County Museum is a particularly good local museum and while primarily of interest to locals and those with local roots is a good rainy day option.

The Cathedral of Saints Patrick and Felim is more modern than it looks and was completed 1942. Its 230 foot spire (background of image) is visible from all over the town. It is worth a quick look inside to see the colourful Italian Pavinazetto marble which was used to create the twenty eight columns, the pulpit and all the statues.

The church in the foreground of the picture is the Presbyterian Church.

Next to Waterford, Cavan is the best known centre of crystal production in Ireland but unfortunately the Cavan Crystal Centre is no longer open. 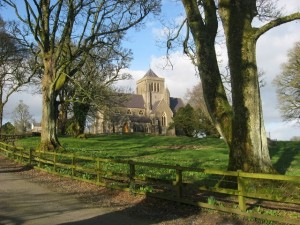 Kilmore Cathedral, just a few miles outside the town, is famous for its Romanesque doorway. While the cathedral was complete in the 1850s, the doorway dates to the late 12th century, and was originally part of the nearby priory at Trinity Island in Lough Oughter.

It is worth taking a drive around the lake lands area where Lough Oughter is just one of many lakes. The whole area is a well known and popular place for fishing bird watching and walking.  Trinity Island is privately owned, and can only be accessed if you rent the holiday lodge there.

Click the markers for things to do and places to see in and near Cavan.

Have you something to add about "Cavan Town, Co Cavan"?