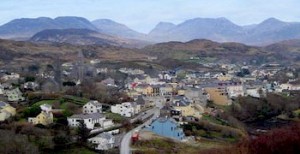 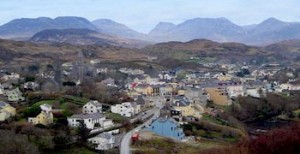 Clifden is in a dramatic location, at the western edge of Connemara with the Twelve Pin mountains in the background, but as a planned town of relatively recent origins, it is quite a contrast to its untamed hinterland.

The town was founded in 1812 and was the brainchild of one man, John D’Arcy, then High Sherrif of Galway who lived in the now ruined Clifden Castle.

His intention was to create a bastion of respectibility, “improving the land and civilising the people“, an intent reflected in the carefully geometric layout of the town with its twin church spires and wide streets.

There isn’t much to see in the town itself, basically its a place to refuel, grab a bite to eat and move on.

For a brief time in the early 20th century Clifden was at the cutting edge of technology, when the first long wave wireless telegraphy station connecting Europe with North America was built there, creating a then revolutionary point-to-point fixed wireless service, relaying messages to Glace Bay, Nova Scotia.

Nowadays Clifden relies heavily on tourism for its livelihood, acting as a centre for walkers and those passing though the area and on the itinerary of every tour bus that enters Connemara, which has led to a proliferation of not uniformly good souvenir shops and restaurants which exist solely to cater to this trade.

It is perhaps ironic that in spite of John D’Arcy’s best efforts Clifden is still entirely dependent on its wild surroundings.

What to see in and around Clifden

There is a small plaque in the town square commemmorating locally born John Riley, commander of Saint Patrick battalion’s in the Mexican-American War in the 19th century.

The nearby Sky Road is one of the most dramatic and beautiful coastal routes in the country and south of the town the Alcock and Brown Memorial overlooks Derrygimla Bog, the site where the first successful transatlantic flight landed in 1919.

Clifden in the News